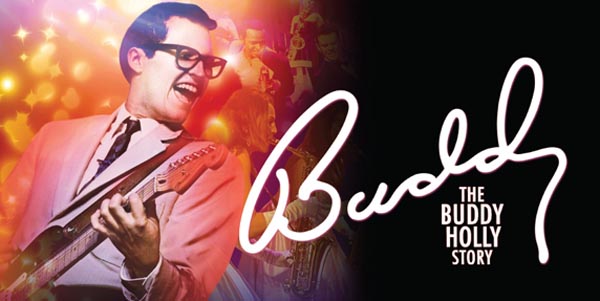 In just 18 short months between 1957 and 1959 Buddy Holly changed the face of modern music, producing in the process a treasure trove of rock and roll classics that have become the soundtrack of following generations.

Buddy – The Buddy Holly Story written by Alan Janes, opened at the London Victoria Palace theatre in 1989 and ran for 14 years. It has since toured the UK for 17 of the last 24 years as well playing on Broadway, completing five national US tours and being named as “The World’s Most Successful Rock and Roll Musical”.

The first of the so-called Jukebox Musicals, Buddy boasts a musical score that includes some of the most enduring rock and roll numbers ever written.

While in parts the narrative lacks depth and detail, the storyline is easy to follow and successfully hammers home Buddy Holly’s determination to write and perform Rock and Roll (seen by many at the time as the music of the devil), rather than the country music played on radio in middle America in the 50s.

While it would have been interesting to find out more about Buddy’s relationship with his mother and with his backing group, the Crickets the main focus is kept clearly on Buddy and how this odd-looking musician with the thick rimmed glasses was able to breakthrough and become possibly the most influential musician of his generation.

The glamour of the original West End staging is missing from this touring production. At times especially in the second I got confused by the same actors playing up to three different roles, but that does not detract from the fact the show is all about the music and the second half gives all the performers a chance to shine as both actors and highly skilled musicians.

Jordan Cunningham delivers a wonderful thrusting performance as Ritchie Valens. Rarely have I seen a pelvis thrust delivered with such rhythmic accuracy. Matthew Quinn demonstrates his versatility playing Hipockets Duncan, Murray Deutch and the wonderfully over the top MC at Clearlake while Thomas Mitchells’ as The Big Bopper, plays it large and is great fun.

Untimately, the show is all about one person and Alex Fobbester turns in a very convincing and solid performance as Buddy Holly. He is a great singer, great instrumentalist and his American accent is not half bad.

Ultimately, the show is about the music and the rolling encores and reprises really got the Monday night Theatre Royal audience tapping their toes and singing along.

All in all, a wonderful, feel good night out and well worth a visit.