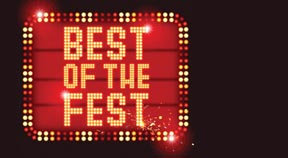 The Best of the Fest night always highlights the best stand up comedians who are appearing in the Brighton Comedy Festival.

LAST NIGHT’S SHOW, MC´d by Andrew Maxwell in his very ”Orish” way, was full of his usual slightly twisted observations about being an Irish man in England and his merciless direct engagement with the audience went down well. His foul mouthed interval tirade was a bit of an eye opener too, but he did what a good host should do and kept the energy high and the night moving along.
First up was Nish Kumar who was a real treat, full of wonderful comments and real world experience about being multicultural and having a complex identity in modern Britain, a real tonic to the nasty right wing stuff we constantly  from the press at the moment. His personal experience about the racism he’s been targeted with was both funny and disturbing and his airport experiences very funny indeed, even when I cringed for him and his endless patience at the ignorance of the  world. I’d like to lock him in a room with Nigel Farrage for an hour.
Canadian Glenn Wool was rather naughty and thrilled the crowd with his very un-pc comments. He is also very cute and flirted with the audience to their great delight. His comedy is near the knuckle and he enjoys shocking you with the most charming smile on his face, a real teaser!
My favourite about how we wanted to be registered as a sex offender so he could fly without crying kids made the audience roar, his timing was excellent and his world traveller anecdotes both well observed and spot on. He´s one to watching is Glenn.
Local boy George Lewis was up next with tales of his childhood and how he came to be a nerd he´s the winner of the Squawker Award and although a bit hit and miss his jokes were well thought out, funny and  strong. I unfortunately had to leave at the interval as the show rang seriously over time, so missed the delightful Kerry Godliman , who I was so looking forward to, as I’d heard great things about her, and Lloyd Langford who I’ve seen before and enjoyed.
For more info on the Brighton Comedy Festival and to book tickets, click here:
There are another three of these nights to come. This was a strong, varied line up but i did start thinking when did stand up comedy get so potty mouthed though?  It’s been a long time since I’ve fucking heard so much fucking swearing on the fucking stage.
For more details of the next Best of the Fest show on October 23, click here: