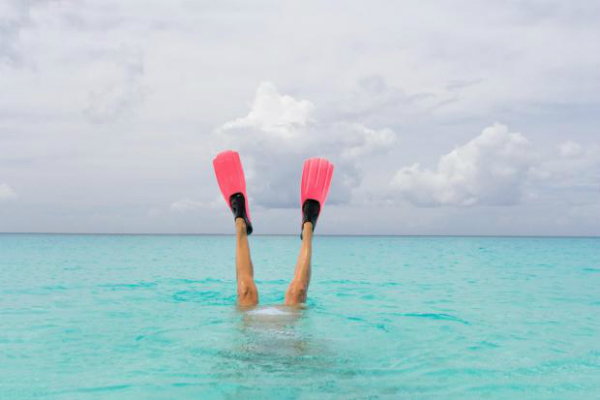 Today is Georgie’s 40th birthday, her friends spy something strange lodged in her ear. Its discovery propels the three women on a surreal, darkly comic journey through their (extra)ordinary world. This was a world premiere by Bold & Saucy Theater for people who don’t always do as they’re told.

Full details of the show here

Kate Driver Jones and Sarah Davey-Hull, have written this wacky, colourful and cheery new show: Aphrodite in Flippers. They are the Bold & Saucy Theatre Company. The show is great, strong female characters, wonderful (and very cleaver) visual humour with props and minimal sets converging, combining and sometimes breathtakingly elegantly redefining the Warrens’ space.  It’s a classic protagonist’s journey, in this case 40 year old Georgie, which at its heart follows the heroines overcoming obstacles and having to accomplish, collect and achieve to redeem herself, and yet it’s much more than that also.

The writers have a wonderful surreal sense of the absurd, but with such a fine, light and careful touch that it soars and takes wing into a special place of belief where performers and audience all agree to conspire in the daftness for the sake of the narrative journey

I like it a lot, I laughed a lot and left feeling cheered up after a dark day their final engaging full powered uplifting rendition of ‘Ain’t No Mountain High Enough’ was done with aplomb, dancing and singing their huge hearts out.  Was there a message? Well yes an obvious one about self-acceptance and loving where and who you are, but also a deeper one about taking a risk with some seriously intelligent material and hoping an informed and educated audience want something ( ache for it!)  more than trite obvious tripe. Sarah (Sarah Goddard)  and optimist Vicki (Vicki Manderson) are the friends and loyal champions of Georgie (Georgina Roberts) and  show us what can be done when you put your mind to it, on many different levels.

Great fringe show, well written, superbly performed and in an excellent venue, although the traffic noise did intrude a little during some of the quieter moments.

For more on The Warrens up and coming shows see their website here.