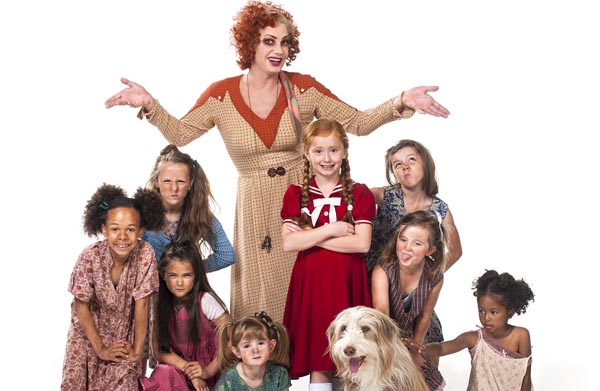 The story of Annie is well documented. Young orphan Annie escapes the clutches of the wicked Miss Hannigan who runs the orphanage and after an unsuccessful nationwide search to find her parents is adopted by billionaire Daddy Warbucks.

In post Great Depression America, Annie is more than just a musical!  It is a social comment piece about everything that America stands for and aspires to.

Following the Wall Street Crash, times were bad and Annie captures the optimism of a country determined to pick itself up, dust itself down and march forward towards tomorrow. Annie’s rags to riches story gloriously highlights that optimism that epitomises the American Dream.

While Tomorrow is the shows best known number and musically the centre piece of the show, there are other fine songs including Hard Knock Life, Easy Street and N.Y.C which was not included in the original film version of Annie but make a welcome return in this production.

The iconic role of Miss Hannigan is played by Craig Revel Horwood, best know to many as the nasty judge on BBC’s Strictly Come Dancing. He plays Hannigan campy and vampy rather than nasty and mean. Apart from some work needed with his hand positions, his performance worked well on many levels.

Miss Hannigan is a gin swilling drunk. Between swigs of alcohol, Mr Horwood managed to show how good an actor and elegant dancer he really is. His vocals especially in his solo number, Little Girls were very impressive and all in all, despite the distractions of working with children and Amber the two-year old Labradoodle who played Sandy, his class shone through, as did his great legs.

Alex Bourne played Daddy Warbucks to perfection. At heart he is a big softie, but being a billionaire and advisor to President Roosevelt, beautifully played by Callum McArdle, he had to be very careful not to expose the softer side of his nature to his staff and contemporaries. Daddy Warbucks is the granddad we all dream of having.

The star of this show is undoubtedly Annie played on opening night by Sophia Pettit. Her vocal range was solid throughout her register and she sang and acted with confidence and maturity way beyond her years. She played Annie cute but tough!

The set design by Colin Richmond deserves special mention; a huge jigsaw puzzle which he says is “a metaphor for Annie’s life as she journey’s through New York and tries to put together the pieces of her life”. The set was cleverly lit by Ben Cracknell who managed to transport us from the dark and miserable orphanage to the bright and sparkling mansion of Daddy Warbucks, with the flick of a switch.

One slight criticism concerning the sound. At times I struggled to understand what the kids, who were all very good in their respective roles, were saying. It might have been their American accents but it was an ongoing issue during the evening.