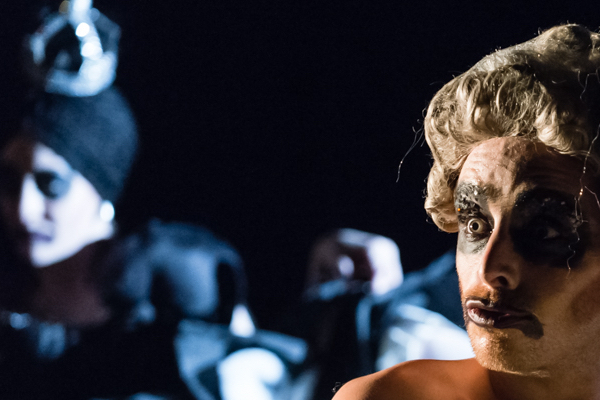 A night with Thick and Tight

THIS IS a long review, boiled down it reads “F’ing excellent, Like watching Nureyev and the Devine David on mushrooms! Book now, like NOW”

Lesson one in being a decent reviewer is always reading the press bumf, so you know what you are going to see and have some idea of what to expect. Lesson two in being an excellent critic is never making assumptions. Lessons three in being able to enjoy performances even when you’re doing five a week is forgetting lessons one and two and occasionally rocking up to stuff and having the jaded, seen-it-all stuffing knocked right out of you by a team of highly trained and ruthlessly rehearsed professionals  who grab you by the stuff of your critical neck, use your brain as a rather elegant but over stuffed football, landing it in the back of the net time and time again and then leaving you after an hour or so of jaw dropping entertainment to waddle back out into the street with a feeling of WTF and WOW more tightly entwined than two eels in a hose pipe.

I’d looked at, well glanced at, the press stuff for Thick and Tight, noticed the  seen-better-days wigs and clownish grease paint, the air of faded glamour and a hint of Grey Gardens and made a snap decision about going along to what was obviously going to be a retro meta nights of demi-monde rough drag, a raggy Frisky and Mannish, a maudlin Bourgeois & Maurice , or perhaps (I secretly hoped)  lost footage of Hinge and Bracket found in the back of cupboard doing their legendary Grey Gardens duet, but no, Thick and Tight are a dance duo, dance! …with a few friends who instantly took every ounce of attention in the room and focused it on their own utterly disturbed and perfectly rehearsed smashing together of the grief of Queen Victoria and Miss Havisham.  I hardly had time to grasp my pearls before they were off, movements as melancholy as they were funny but no time to giggle before the mask is ripped off and the raw black abyss of loss is revealed. Compulsive moments recall happier moments, like psychotic zoo animals doomed to tread the same days and steps over and over again, the loss of love, the loss of never being loved, tragedy and torment, infamous personal trauma and sour public intrusion,  bitterness and bereavement this duo turned tighter and tighter around the same centre of gravity. A black hole of heartbreak.

Utterly nuts, darker than night, stylistically astonishing, with reference and hark back folded into a raw physicality that seemed spontaneous but must have been the result of a whip holding director and hours of rehearsal, with some wonderfully perfectly timed lip syncing  Martita Hunt’s Miss Havisham, singled out and repeated to highlight the urgent need.

I always struggle with dance reviews, it not being the natural subject for me, and avoid most opportunities to go along and watch dancers do their stuff.  Tonight a lack of attention landed me in the Marlborough but an act of astonishingly luck ensured that Thick & Tight were there to entertain.

This young pair of passionate performers had two sets of  oddly coupled dancers,  linked together by a heart of darkness the final dance being a tightly wound up soaring of tension and vulnerability of Marylyn Monroe and Diana Spencer, their fluttery Teflon meringues of personality being feasted on by our ravishing public gaze, making them jiggle faster and faster until they reach a speed that only photons should live at and are smashed into fragment’s and shards. Eleanor Perry’s physical modulation echo’s Spencer’s movements perfectly and the eyes said it all, Daniel Hay-Gordon although eschewing a Monroe wig captured each perfectly timed rolling hipped movements of the film star with an almost autistic reproduction. It was compulsive, uncomfortable viewing.  I was astonished, it’s the first time I’ve ever felt sympathy for Diana Spencer and Perry’s capturing of her vulnerable beauty was a triumph, again mixed in with sword sharp lip synch from movies  and interviews of the pair this allowed an exploration of the physicality of their vulnerabilities to clash with the gender performance projected with such high wattage charm.

Julia Cunningham gave us a new solo Radical Daughters of astonishing agency and power, wrapping their body around the lives and fates of Claude Cahun and Marcel Moore, moving with a fluid grace interposed with harsh demanding steps, stamping and goose stepping, tentative and fleeting, turning but never finding escape, reflections of oppression, and confusions but all the time returning to this centred other.  This was an intersectional exploration of resistance in the face of domineering conformity.

My mind never wandered for a moment in this show, which is probably the first time that I’ve sat throught  dance and not thought about what I need to do tomorrow, finding a synonym for engaging, or wondered about what to have for dinner.  I did find myself wondering why dancer’s eyes are always so compulsive, and seemed to look into each and every one of us in the room, the dancers tonight all had quite bright Beryl coloured eyes, blinking out of the darkness of their movements like two stars in the deepest night.  Then the urgency of the movements and the compelling struts and stance whipping and metamorphosing before me dragged me back of into the physical recanting of grief & struggle being explored on the stage.

With some superb lightning and tech support and a supporting cast of Josh Spear, Harry Alexander, Claudia Palazzo, Thom Shaw, all as well-drilled this was a breath-taking evening of the avant-garde!  Excuse my gush, but this pair deserves it. I left the Marlborough astonished and impressed by what I had seen, seriously impressed by their manically macabre camp performance and my serendipitous evening.

Thick & Tight, a dance duo like no other, bring all the drama, musicality, farce and face you can cram into a show. This rapturous triple bill from Daniel Hay-Gordon and Eleanor Perry brings famous faces to life to reveal the yearnings and imperfections of human nature.