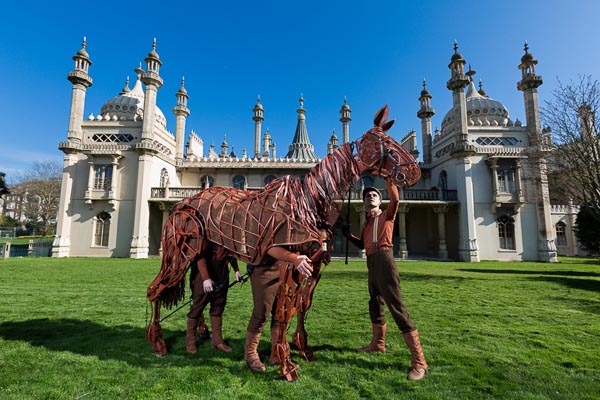 A multi-award winning, West End superstar was spotted on Brighton Beach and in Pavilion Gardens this week as Joey, the life-sized, equine puppet and star of War Horse came to town to promote the arrival of the acclaimed National Theatre production, which premiers at the Brighton Centre from January 25 – February 10, 2018.

The play has been seen by over seven million people worldwide, and completed a record-breaking eight year London run at the New London Theatre on March 12 2016.

It has won 25 awards, including a Tony Award for Best Play on Broadway, and has been seen in 97 cities and 10 countries, including productions on Broadway, in Toronto, Berlin, the Netherlands, Belgium and China.

Although War Horse has toured in the UK and Ireland before, this will be its first appearance in Brighton and as such it represents a major coup for the city and for the Brighton Centre.

War horse is a deeply moving story of a boy and his horse – a remarkable tale of loyalty, friendship and supreme courage set against the backdrop and horrors of the First World War. Its ground-breaking puppetry work and innovative, multimedia staging has thrilled audiences around the world, and the play has become the most successful production in the National Theatre’s history.

During the run The Brighton Centre is promising to introduce special “atmospheric changes” to the venue which will help bring the passion and emotion of the production to life in the auditorium.