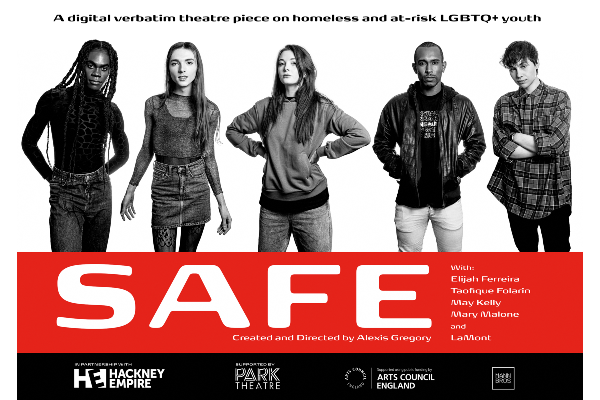 Performed by an out-LGBTQ+ cast, Alexis Gregory’s play Safe is billed as a raw, edgy, challenging production . Its wide-ranging  subject matter explores all of the following: gender, sexuality, identity, childhood, family, addiction, religion, class, race and what it means to be truly safe in today’s world.

So Safe is a verbatim theatre piece , combined with live music and spoken word written specially for the show by poet Yrsa Daley Ward. It’s described as hard-hitting and full of bite, but also full of humour and ultimately it’s seen as an uplifting celebration of Queer survival.

Its cast includes Taofique Folarin (co-star of the online Queer drama  The Grass  Is Always Grindr ) and LaMont – winner of Pride’s Got Talent 2018.  The show launches online via the Hackney Empire website and YouTube and is supported by Park Theatre. Its premiere is at 7pm on Monday 19 April, followed at 8pm by a post-show talk.

Tim Sigsworth, Chief Executive of akt said: “ the most powerful voice for change must come from listening to those in our society who have lived experience of being denied their human rights. The incredible Safe provides such a platform by beautifully sharing the life histories of young people who have experienced abuse, rejection and homelessness, just for being brave enough to come out to their loved ones”.

Akt supports LGBTQ+ people aged 16-25 who are facing or experiencing homelessness or living in a hostile environment. It supports safe homes and employment, education or training  opportunities.

Personal post-script : I have met several beneficiaries of the charity and it was wonderful to see how their lives turned round through the support and kindness they were shown. I also have good friends who have provided a safe home to a number of such young people and changed their lives.

more information about the charity at akt.org.uk

Look out for a review of Safe , coming soon.