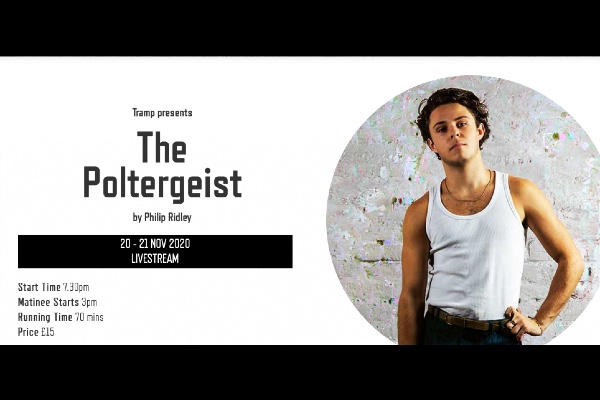 Theatregoers have a rare treat this weekend when Southwark Playhouse live-streams the world premiere of brilliant playwright Philip Ridley’s latest play The Poltergeist.

Staged by Tramp Theatre Company ,  which has strong links with the Playhouse, it is a one-man show starring Joe Potter.

The publicity is intriguing. “ Art’s my hobby too. Hobby ?” Says the show’s flyer.

Sasha was destined to take the art world by storm. At the age of 15 pop stars wanted his paintings, and a new exhibition was going to make him a millionaire. But now he lives in a run-down flat with his out-of-work boyfriend , serves in a stationers and no-0ne’s even heard of him. – The play asks – what went wrong ?

This darkly comic new play is about art, family, memory and being haunted by the life we never lived.

The highly acclaimed Ridley’s previous plays include The Fastest Clock in the Universe, Radiant Vermin, The Pitchfork Disney  and Mercury Fur as well as the screenplay for the 1990s  film The Krays.

It’s directed by Wiebke Green, produced by Jack Silver , with actor/producer/director Denholm Spurr as associate producer. Denholm was the subject of a Gscene feature last month and is best known for his starring role in the streamed series The Grass Is Always Grindr.

Joe Potter told me : “ I first came across Philip’s work while studying at Guildhall. He taught me a lot about who I am, and how I work. You have to listen to the text – it’s not about you; you have to put your all into it , centre it away from yourself – i’s not about you it’s about the story. “

” I want to see more dangerous theatre, full of risk and with potential for change . I want the audience to leave with a strong feeling “