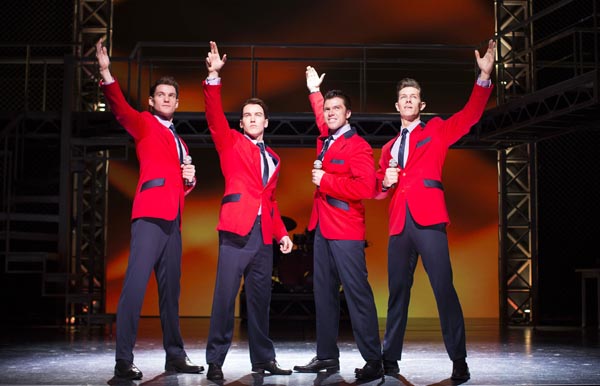 Jersey Boys opened in London in 2008 and has been seen by nearly 23 million people worldwide. Now celebrating its eighth year in London, it is firmly established as one of the West End’s longest running and most popular shows, where it plays at the Piccadilly Theatre.

The musical is the true story of Frankie Valli and the Four Seasons and their rise to stardom from the wrong side of the tracks.

These four musicians from New Jersey became one of the most successful bands in pop history, they were inducted into the Rock & Roll Hall of Fame and sold 175 million records worldwide, all before they turned 30!

The show is packed with their hits, including Beggin’, Sherry, Walk Like A Man, December, 1963 (Oh What A Night), Big Girls Don’t Cry, My Eyes Adored You, Let’s Hang On (To What We’ve Got), Bye Bye Baby, Can’t Take My Eyes Off You, Working My Way Back to You, Fallen Angel, Rag Doll and Who Loves You.

Jersey Boys is the winner of 55 major awards worldwide including a Tony on Broadway, an Olivier in the West End and an Helpman in Australia for Best New Musical.

As well as still running on Broadway and in the West End and on tour in the UK and Ireland, Jersey Boys can be seen in Las Vegas and across the United States on its US National Tour.

This current UK tour has been staged by the entire original Broadway creative team.