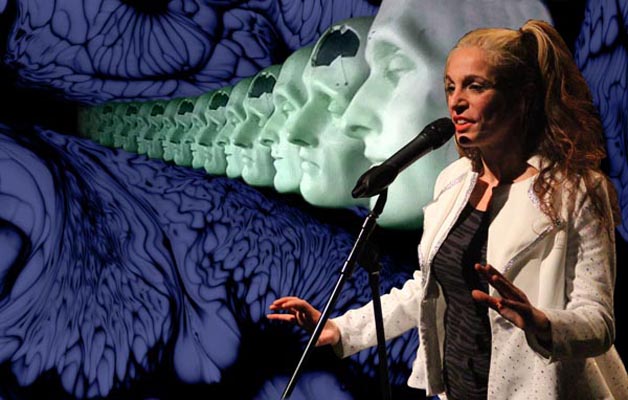 Is it a gig? Is it a play? Is it cabaret? No! It’s Get Therapy… and it’s heading for Brighton.

On Wednesday, November 22, the Latest Music Bar will host a single special performance of Danielle Imara’s GET THERAPY, a brand new show about her own experiences of addiction and group therapy.

Danielle says: “The show started out as a ten minute multi-media piece with no dialogue called Mad, with content generated from interviews discussing depression, anti-depressants, labelling and psychotherapy.”

“Verbatim dialogue is often more interesting than anything you can make up; it’s sometimes strange and often powerful.”

As well as verbatim scenes from the group therapy room, the show is full of original music and songs, dance routines and multi-media projection.

Danielle continues: “Music and dance offer an uplifting break when the subject matter might be a bit challenging.”

“My background is playing gigs, mainly as a bass guitarist, and as I love to dance it stands to reason that my work as a writer and performer would be a mix of genres.”

“Compared to some, my mental health history isn’t dramatic, so I’ve used my personal story of long term anti-depressant use and group therapy as a way of introducing other people’s stories, which include suicide attempts, Electric Shock Therapy, being diagnosed as bipolar, being sectioned and more. The Get Therapy characters are hybrids of people I’ve interviewed, known or been in therapy with – and of course each actor brings to the role an ingredient that’s beautifully unique.”

“As an actor it is a wonderful gift to play a real person” says Sabrina, “but you are always aware of a certain responsibility to that person and what they have been through. Amy hides the extent to which her mental illness affects her well, and admitting that she needs help does not come easy to her.”

Stephen is played by Matt Ian Kelly, who has found some connections with the character during the rehearsal process.

Matt says: “First and foremost, Stephen is an extremely gentle soul. He really picks up on the vibrations of everyone around him. He’s cautious and definitely thinks before he speaks.”

“Talking to Danielle, the cast and director in rehearsals I was reminded that one of the reasons I’m acting is due to the fact that I’m, at my core, very shy. I started acting due to encouragement from a child psychologist. I was so shy that whenever an adult spoke to me I would just clam up and suffer extreme anxiety. Acting gave that little boy a chance to try and approach the world from a different angle.”

The show is directed by James Haddrell, artistic director of Greenwich Theatre. “Working on this show has been like being on a rollercoaster – in rehearsals we’ve covered some very dark material, and the next minute the characters, and the actors, are laughing, singing and dancing. This is an astonishingly personal, honest piece about the highs and lows of mental health, addiction and therapy, but I think Danielle has also written a funny, uplifting, unforgettable show.”