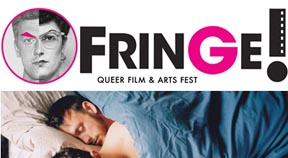 Fringe! returns to East London for the fourth year running from Hovember 4-9.

Alex Karotsch, the Festival Producer, said: “We’re delighted to bring back Fringe! for the fourth time with new festival dates in November, an expanded art programme supported by Arts Council England and a host of fantastic new films. We can’t wait to share the exciting Fringe! line up with our audience this autumn.”

The not-for-profit festival is pulled together by a team of volunteers and hosted by different venues around East London, with many events being free or affordable.

Highlights of Fringe! 2014 include:

• A special mini-strand on Riot Grrrl and queercore including the screening of a new cut of Jill Reiter’s lost film In Search of Margo-go, starring Kathleen Hanna, produced especially for Fringe! alongside the UK premiere of Abby Moser’s Grrrl Love and Revolution.

• NYC-based art duo Superm (Slava Mogutin and Brian Kenny) will be attending the festival and present a programme of their shorts as well as hosting an event at Dalston Superstore.

• “Ken. To Be Destroyed”, by Sara Davidmann, brings the story of her uncle Ken (K), trans* in the 1950-1960s, to Fringe! in the shape of an exhibition. Using family letters and vintage photographs and photographic processes, Davidmann tells this family secret, bringing to light the story that is missing from the family album.

• This year’s community-focused events will include a range of sexual health events and workshops programmed throughout the duration of the festival.