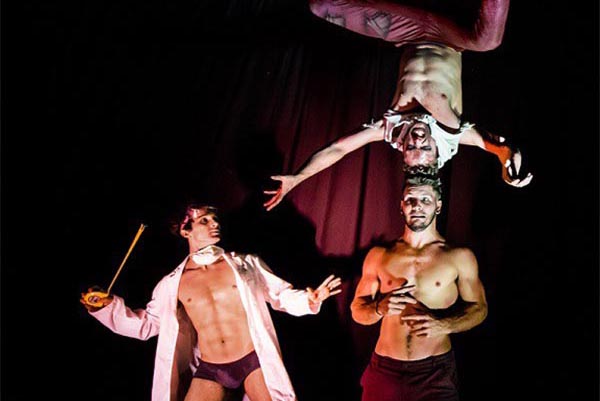 The award-winning comic acrobatic show Elixir returns to the Spiegeltent at Brighton Fringe after their killer debut at last years Festival.

Elixir is circus like you have never seen before – uninhibited by cliché or expectation, subversive and hilarious at the same time.

Acrobats fly five metres into the air on the teeter board, spin upside down on the mesmerising roue cyr wheel, perform incredible one arm hand stands on wobbling canes and balance on nothing but their heads on a swinging trapeze.

Elixir is an incredible display of acrobatics and physical comedy, tied together with an eccentric narrative.

The show, an all Australian production, follows three bumbling (albeit very handsome) scientists who attempt to create the elixir of life. The scientists test their concoctions on themselves, and the madness that breaks loose in the laboratory is the perfect mix of amazing acrobatics, impeccable comic timing and an engrossing narrative.

The three members of Head First Acrobats are all graduates of the National Institute of Circus Arts.

Elixir was voted in the top 10 shows of Adelaide Fringe in 2005, and won the first and foremost entertainment award in its UK debut at Brighton Fringe in 2015.

This is circus as you have never seen it before, uninhibited by cliché or expectation, subversive and hilarious at the same time. A unique show not to be missed.