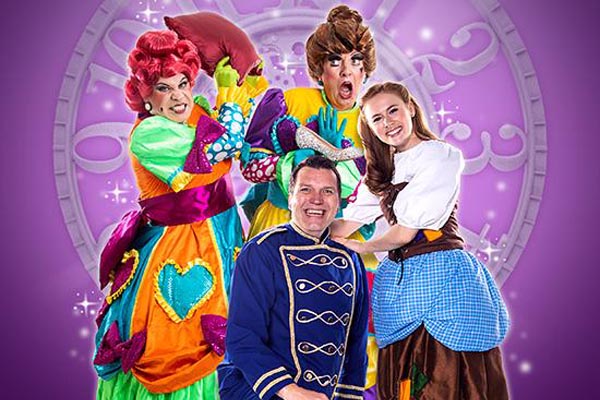 There ain’t nothing like a dame – Best friends reunited for Cinderella Panto at Eastbourne!

Eastbourne’s Devonshire Park Theatre will once again host the biggest panto in the South East, Cinderella from December 7.

Dame Martyn Knight returns as one half of the ugliest sisters around – with his partner in crime, Scott St. Martyn who has known Martyn since the age of 11 – and been best friends ever since. The first day of rehearsals will in fact mark their 50th anniversary of them both becoming friends!

Scott St. Martyn now lives in France but he has been tempted back to the UK for this pantomime season with his old pal Martyn who has been delighting Eastbourne audiences for the last 15 years.

Beginning a stage career at the age of 11, coincidentally that’s how he and Martyn first became friends, Scott has enjoyed a hugely varied career on the boards but highlights include West End appearances as Bert Barrie in 42nd Street at Drury Lane, Chantel in La Cage aux Folles at the London Palladium and Worker 1041 in Metropolis at the Piccadilly.

Scott has performed in pantomime all over the country including Stevenage, Guildford, Woking, High Wycombe, Canterbury and Dartford. Cinderella marks his Eastbourne debut.

Pantomime writer and director Chris Jordan said of the casting: “We know that Martyn and Tucker are audience favourites, however Cinderella splits this beloved duo up so casting the opposite Ugly Sister was going to be tricky – but when Scott’s name came up it was a natural and obvious fit.”

Chris added: “Scott and Martyn have incredible onstage chemistry because they know each other so well having enjoyed a 50 year friendship! I’m sure audiences won’t need to worry about seeing Martyn, who normally plays such a warm dame, in a different light as Ugly Sister – as he and those in the audience are going to have a LOT of fun watching him with his best friend. It’s going to be a ball!”

Of the casting Scott said: “I’m counting the days til’ we start panto and I’ve not said that for a long time! It had to be something really special to tempt me away from my lovely life in France but the thought of being with my oldest friend on stage is just an absolute delight.”

Scott and Martyn have been life-long friends, they used to share a flat together in London in the 1980’s and even performed to Queen Elizabeth II and Prince Philip on the same bill at the Royal Variety performance in 1985 – although they were not on the stage together at the same time.

Scott jokes: “The Queen could always book for Cinderella to see me and Martyn together again on stage at last!”

Marytn Knight said: “It will be wonderful to get back to the Devonshire Park Theatre and under those magical stage lights but this time with my best friend by my side. We are going to give the audience a lot of laughs with our deliciously devilish sisters Flora and Marge.”

He joked: “We are going to have fun with my old mate Tucker as Buttons too – it’s going to be a change not to play his Mum!”