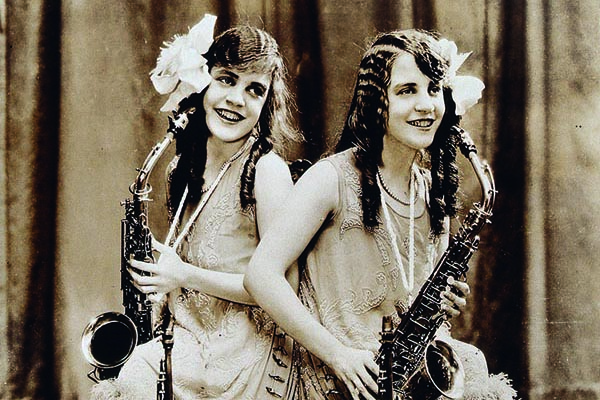 A campaign has been launched in Brighton to honour conjoined twins who became international entertainers, touring Europe and United States in the 1920s and 30s.

VIOLET and Daisy Hilton were born in Riley Road, Brighton, and local historian Alf Le Flohic is leading a drive to raise funds for a plaque to be installed outside Number 18, where they were born in 1908.

Mr Le Flohic, senior website officer at the University of Brighton, said: “The twins were huge stars in their day – at the peak of their fame around 1927 they were earning $4,000 a week, about three times the average annual American salary, but they have largely been forgotten in the UK.

“When I discovered they came from Brighton I thought it was only fitting to have a plaque outside their birthplace.”

The sisters were rejected by their mother, an unmarried barmaid, and adopted by landlady Mary Hilton who saw their financial potential. Joined at the base of the spine they were originally known as Brighton’s United Twins, a reference to The United Brothers Chang and Eng Bunker, the original Siamese Twins.

The sisters were exploited for their disability – just weeks after being born they were put on show for money at The Queen’s Arms pub in George Street, Kemptown, Brighton. As adults they toured sideshows, vaudeville and burlesque circuits, singing and dancing, and appeared in two films: Freaks (1932) and Chained for Life (1952).

Mr Le Flohic said: “As adults the twins took the Hiltons to court and gained their freedom, but settled for only a portion of the money they had earned over the years. They fell out of favour with the American public after Violet’s big celebrity wedding in 1936 was quickly revealed to be a publicity stunt.”

The twins’ last show was in North Carolina in 1961 and eight years later they died within a few days of each other, reportedly from Hong Kong flu.

Mr Le Flohic said: “I’m delighted my nomination for the plaque has been accepted by Brighton and Hove City Council and very grateful the current owners of number 18 have agreed.

“It’s a fitting tribute to Violet and Daisy – they had hard lives but became stars against the odds. As a city that embraces people who don’t necessarily fit the norm, they are definitely ‘one of us’ and deserve to be more widely known in Brighton. To add a further twist to the story, there were rumours that Violet preferred the ladies, and her husband Jim Moore was well-known to be gay.

“They were definitely talented. They could play numerous instruments and had lovely singing voices. They appeared on the cover of sheet music for songs they made popular. They danced with a young Bob Hope and were befriended by escapologist Harry Houdini.”

The Queen’s Arms pub and Brighton Hippodrome will form part of city walking tours Mr Le Flohic will be running this summer – with all fees being put towards the cost of the plaque.

To donate towards the cost of the plaque, click here:

Photos of Violet and Daisy courtesy of the Wellcome Collection.