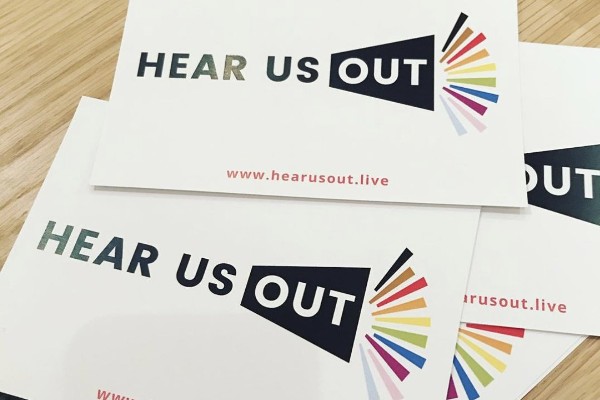 Later this year promises to be a fascinating festival. Jaq Bayles caught up with artistic director Dinos Aristidou to find out more.

Hailed as an ”ambitious two-year project, which aims to record and celebrate the stories of older LGBTQ+ people in south east England”, Celebrating Our Stories won’t hit its zenith until September 2020. But, in the meantime, there are plenty of opportunities to get a taste of what this New Writing South ‘verbatim theatre’ project, supported by Arts Council England and the Baring Foundation, is all about.

In a nutshell, the wide-reaching enterprise has involved people from all walks of LGBTQ+ life and encompassed a range of ages in its efforts to “celebrate and amplify the stories of the older members of our community”.

And its evolution has covered a variety of stages, from training, to story gathering, to story listening to performance, giving many people an opportunity to be involved and learn new skills.

The upcoming stage production, the Hear Us Out Festival, is the baby of artistic director Dinos Aristidou, whose enthusiasm for and pride in the project is palpable. “Because it’s a celebration it doesn’t mean it’s a strict story of a time. We felt very strongly that this would be a good time for affirming that after all the politics and identity issues,” he says. “We didn’t want it to be a reminiscing project but more about the people and their experiences. It has been diverse and very different and a challenge to find a common thread.”

The collecting of some 35 stories was undertaken by people who were trained as Story Gatherers to go out and record the stories of older LGBTQ+ people across the south east. Dinos continues: “We didn’t want people turning up and us asking them to tell their life story unprepared, so we got the material in advance in order to decide how to tell their life story.”

This involved clustering the storytelling around six themes: My Queer Identity; Home; Family; How We Have Changed the World (Straight); Celebration; and Folklore (stories we have told and stories we are told).

The volunteers were then encouraged to “tell uninterrupted stories so the performer hears the story and tells it as it is with hesitations, giggles, coughs etc.”

And this is the crux of how the festival will work. All the performers are telling someone else’s stories, but from that person’s own words, fed to the performer through headphones and repeated verbatim. “Your eyes deceive you because what you hear is not the person you see.

“Our history is one of what is not spoken as well as one that is,” adds Dinos. “A lot of people have been voiceless and not had a chance to tell their stories publicly. We wanted stories that had been unheard or not put together in someone’s head.

“There’s a lot to celebrate in terms of ‘here we are’. It’s not just reminiscing and affirming – it’s also making clear that we haven’t stopped. Just because someone is older doesn’t mean there still aren’t things they want to do.

“The other side is about giving older people the opportunity to develop their skills as performers and writers etc.”

The festival steering group comprised a mix of people of different ages who are either involved with older people or are older people. It resulted in a lot of energy, says Dinos: “It’s very joyous. These stories affirm our own experiences or make us think in a different way. There’s a lot of joy that comes from listening to these stories and it’s very much about listening. We are so used to images but listening to words is what it’s about.”

It has been a long, involved and fluid process, but the fruits will be evident. “Silence was our safety – we accommodated it. That was how we lived life. Young people’s experience now is both similar and very different. There’s a visibility but I don’t know to which extent it’s helpful or not. The piece will also be looking at what identity means at different points in time. What do words say, how do we read others people’s words? It’s been lovely. We’ve had some wonderful moments of connection. That’s what was joyous about the project.”

In the run-up to the September 19 main event at the Sallis Benney Theatre, the project will be presenting satellite performances, socials and talks in non-performance spaces such as residential homes, day centers, libraries and community centers.

And there’s still a chance to get involved as the project is looking to involve as many people as possible, especially over the age of 50 – performers, stage managers, lighting technicians, photographers and musicians. And no previous experience is required – the point is to try out something new.

Note for your diary: Celebrating Our Stories event at the Sallis Benney Theatre, Brighton, Saturday, September 19, 2020.