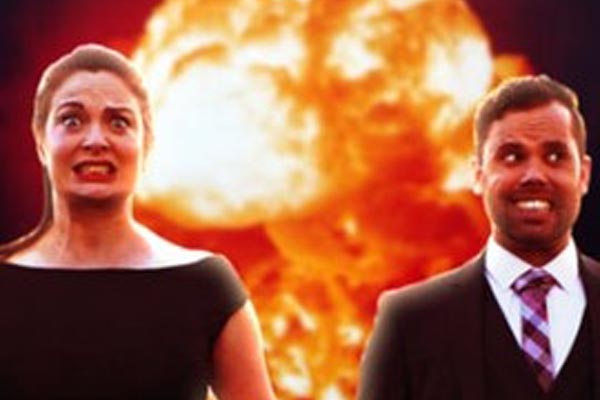 Award winning Australian theatre company Holland St Productions has brought its latest offering to Brighton Fringe for a UK premier – and what a treat it is.

STRAIGHT from the off this wickedly funny cabaret grabs you and sweeps you along with clever, catchy original songs and two dynamite performances from Erin Hutchinson and Tyler Jacob Jones.

The show takes its inspiration from real-life survival tales from around the world, setting bizarre stories about subjects like exploding toilets, serial ship-wreck survivors and people struck by meteors to a range of musical styles from knowingly bombastic show tunes to chirpy calypso pastiches. There are nods along the way to Sondheim, Rogers and Hammerstein, Disney and more, and it all makes for a hilarious and thrillingly entertaining ride.

Hutchinson and Jones are both blessed with great singing voices, but it’s their accomplished comic acting and a great on-stage rapport supported by some ingenious choreographic staging and use of props that takes this show to another level.

They are brilliantly supported by Joshua Haines’s intuitive piano accompaniment which was just right in all the right places, showcasing the wit and variety of Robert Woods original score.

This is a first class show that clearly merits the fringe awards and plaudits it has recently received back in Australia. Catch one of the remaining Brighton performances while you can.