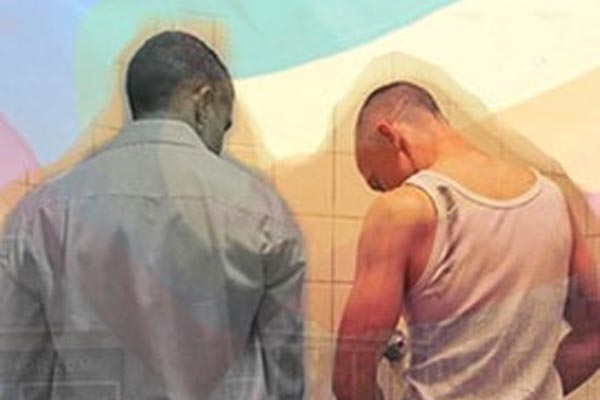 SYLVIA, an ex-actress turned book illustrator is married to Philip, who has inherited the uninspiring estate agents business that was his father’s. They are living in an icy marriage, where Sylvia reveals she is afraid to be alone with him. Desperately wanting a child and unable to have one, theirs is a semi-loveless relationship.

When Sylvia engineers a meeting between the lonely, introverted writer Oliver and her husband, she sows the seeds for disaster and emotional chaos.

We are in 1959 London, but only for the opening scene. In Scene 2 of the play’s 10, we are with an Oliver, a Philip and a Sylvia but it is now 2019, and these three characters are very different. Sylvia is a feisty and highly successful actress, Philip a photographer and Oliver a journalist trying to start a gay magazine.

And as Alexi Haye Campbell’s play develops back and forth between the two time periods, we see that the sexual problems of their three main characters are not that different.

It becomes clear that the 50’s couple of men have had a 4-month affair, which ends with a brutal rape on Oliver by Philip. Sylvia confronts Oliver and though she says she is not blaming him, she clearly is. And she’s also highly insulted.

Phillip takes the drastic step of going for aversion therapy, the true horrors of which are soullessly and clinically described to him by an uncaring doctor, who says his perversion will be “cured”.

In the contemporary set of scenes, Oliver is a serial addict of stranger oral sex, and believes himself to be a lost cause. Having broken up with boyfriend Philip, he desperately yearns to get him back, which Sylvia engineers at Pride.

But the Pride of the title is really the pride of a man being who he truly believes himself to be.

This is a story of loneliness, of dishonesty and a portrait of the kind of man who is deeply ashamed of what he has become and feels nothing but self – loathing.  At the other end of the scale, it is a triumphant celebration of what might be.

Joseph Bentley as the two Olivers, is witty, shy, loveable and infuriating. Nick Cousins is less convincing as the 50’s Philip, buttoned up, dry and a little stilted in his delivery of what is to be honest quite poorly written dialogue. Charlotte Anne-Atkinson is haughty and proud but emotionally damaged as Sylvia 1 and marvellously open and fresh as Sylvia 2.

There are 3 cameo performances by Scott Roberts as an outrageously camp Nazi lookalike escort, as a right-on idiot editor who has a wonderfully tender heart, and as the uncaring doctor.

The Pride is at the Brighton Little Theatre as part of the Fringe until June 1.