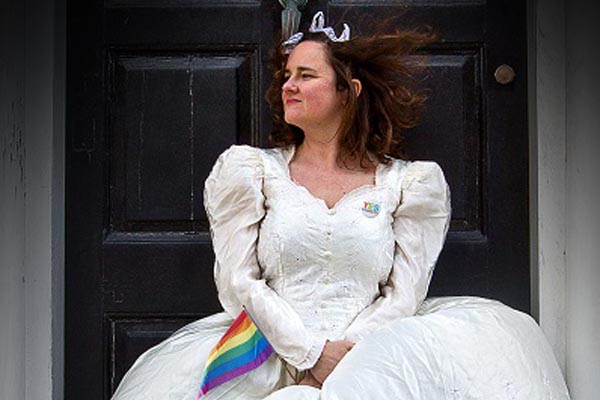 It’s timely that this play about the successful marriage equality referendum in Ireland is being aired in Brighton just at the time of another monumental referendum – on abortion laws – has been an overwhelming success in the Republic.

THIS award-winning play stars its writer Ann Blake in a bitter-sweet largely autobiographical look at her life before and during the referendum.

Initially convinced she is straight, she eventually discovers the love of her life Jenny and the show punctuated with very funny songs  tells the ups and downs of their relationship, the ignorance and hurt which others – including your closest relatives can cause.

But ultimately it’s a celebration of being different – of as Ann puts it: “becoming a minority overnight”. She is counterbalanced in this uplifting hour by Lucia Smyth, who plays a wide variety of characters from Jenny to Ann’s mother and father, her counsellor and a very homophobic registrar.

Ann readily tells us that she never had the problems other gay people have – no double life, no sense of guilt, no bullying, she does exhibit a widely known phenomenon – internalised homophobia – which leads to tensions in her relationship with Jenny.

From her opening song which tries to analyse hetero relationships – “A woman draws her life from man and gives it back again,” Ann paints a picture of an Ireland dominated by the Catholic church and its strictures and the dilemma this causes for LGBT+ children of devout parents.

But LGBT+ politics aside, this is first and foremost a love story  – Jenny makes her feel more love than she thought possible, and she clearly reciprocates.

When Jenny becomes an activist for marriage equality, Ann’s response is not to knock on doors but to write a play – the precursor of this show.

What works so well in this production by Paul Meade is that Ann manages to come in and out of the story, talking directly to us and being nudged back on script by Lucia in clever by-play between them.

And in the long-run it is her own life story – she tells us at the end that having delayed marriage after the referendum decision, she and Jenny will marry for real next month.

Perhaps her next play will be the ups and downs of married life. I look forward to it.

The Morning after the life before is at the Marlborough Theatre tonight May 27 and Monday May 28 at 7.30pm