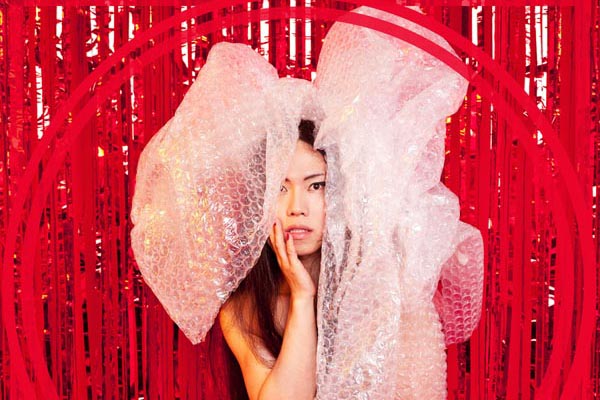 FRESH from being the iconic face of Smirnoff’s LGBT We’re Open campaign and Toyota’s creative Go Your Own Way campaign, comes the debut show ‘24/7 LIVE’ by an androgynous artist that defies both gender and genre…

Join British-Chinese provocateur popstar LE FIL as he, she or it explores a 24/7 world of gay-straight men, desire and objectification through a fusion of hip-thrusting, pounding music, twisted autobiography and gender-bending performance art.

This ‘pop-gig-with-extras’ opens it doors to cruising toilets, bad romances and explores the modern constructions of gender that package us up for consumption. Armed with killer hooks and queer looks, Yorkshire-born LE FIL is ready to smash gender stereotypes one song at a time.

Expect striking visuals, queer dancers and warped pop routines to a kaleidoscopic soundtrack of live music taken from LE FIL’s Pop Sculpture and Nightlife EPs that will leave you gagging for more.

LE FIL is an independent British-Chinese pop artist and singer from Yorkshire, living and working in London. His current Nightlife EP features uplifting, euphoric songs like ‘24/7’ and ‘Genesis’ that fuse memorable melodies, powerful vocals and catchy hooks inside an electronic soundscape.

QX Magazine describes the music as “a gorgeous, sensory kaleidoscope of sound”, while Attitude Magazine called him a “living, breathing pop sculpture”.

LE FIL fuses his music with dance, performance art and a visionary aesthetic to deliver ‘pop gigs with extras’ that are altogether entertaining, subversive and thought-provoking.

The name is an abbreviated version of the artists’ birth name Philip. Secondly it refers to his androgyny through the French masculine appropriation of the term ‘the girl’ (la fille).

Finally when translated in French, LE FIL means the thread, which the artist has taken to symbolise ‘a continuing thread’ that weaves together his diverse range of disciplines and ideas.  As both the sculptor and the sculpture, LE FIL uses his body, skills and art to challenge notions of gender and identity.

LE FIL is an advocate for LGBT+ rights, gender fluidity and self-expression. He regularly performs at LGBT+ venues, with groups and artists such as Sink The Pink and Royal Vauxhall Tavern, and has featured in gender-related campaigns such as Selfridge’s groundbreaking gender utopia video Agender.

LE FIL is currently the face of Smirnoff’s #WeAreOpen campaign celebrating cultural diversity, queer nightlife and non-binary communities. In addition, LE FIL has partnered with Toyota for their #GoYourOwnWay project to produce a one-off pop music art spectacle and short documentary to celebrate self-expression and transformations.