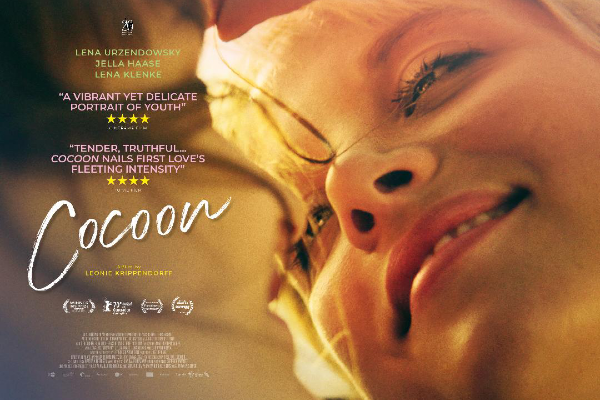 Set in the heatwave of 2018, Leonie Krippendorff’s film about angst-ridden coming-of-age lesbian desires is dripping with symbolism but it gets away with it.

From its title to the metamorphosing caterpillars kept in the dark in jars  by the 14-year-old Nora, it’s a story of growing awareness of identity and sexuality set in a German suburb that’s seen better days.

Nora, played beautifully by Lena Urzendowaky, with hang-dog expression and self-conscious immaturity, tags along with her outgoing sister Jule and Jule’s friend Alyssa. Poor Nora is the butt of other boys and girls’ taunting and it all  just seeks to emphasise  her separateness.

When she very publicly menstruates for the first time her isolation  and confusion only grows.

But then she meets the worldly-wise Romy ( Jella Haase ) and Nora’s burgeoning puberty finds a goal for her desires.

The two sisters’ wayward drunken mother seems oblivious to her daughters’  needs and eventually even Nora’s sister tells her to ditch her new friend without realising what their true relationship is becoming.  There’s more symbolism with Nora’s party costume of a rainbow unicorn, more changing of caterpillars to moths and butterflies , and more water frolicking.

The course of same-sex love seems to founder for a while and the ending is poetic but not entirely explicable, but it’s a beautifully photographed film and the central performances are all true , honest and emotionally charged – and in the end we know that Nora is sure to make a beautiful butterfly in her own way.