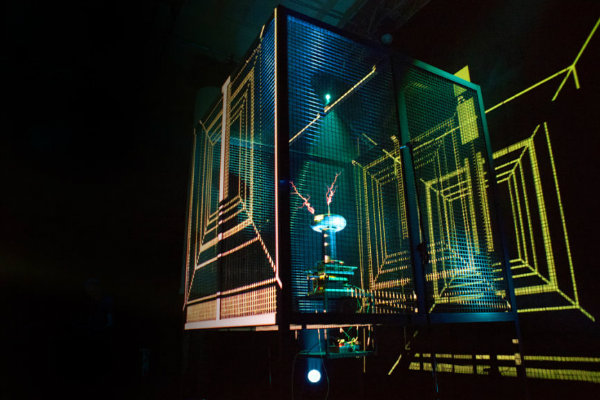 The Spire, Brighton Festival, May 18

VISUAL artist Robbie Thomson harnessed the power of the Tesla coil, the 19th century invention that first allowed people to see electricity spark under control and dance. A very loud throbbing  soundtrack with light touches of frobeat and ambient electronica by the artist on laptop and synthesiser  was blended with projected visuals and the discharged sparks from the Tesla coil, shooting sonic bombs and visual fireworks flaring through the Faraday cage that contains it.

Light fused with sound in this unique sensory phenomenon and it was certainly the oddest and weirdest thing I’ve seen in the Festival (or Fringe) this year.

The principle behind the Tesla coil is to achieve a phenomenon called resonance. Coil’s shoot current just at the right time to maximise the energy transferred into the secondary coil. Think of it as timing when to push someone on a swing in order to make it go as high as possible. The Team at the Spire have set up a Tesla coil in it’s very safe metal box (google Mr Faraday) with an adjustable rotary spark gap giving some control over the voltage of the current it produces. The coils can then create lightning displays and play music timed to bursts of current.

It’s certainly very cool, in a blacked out semi-decaying church filled with smoke and artfully playing lights it seemed cool too, but it failed to spark me. I really enjoyed the Tesla coil, more, much, much more of that please, it’s a thrilling thing to observe. The music failed to electrify and the projection detracted from the sparks themselves.

The Tesla Coil sat there, throbbing like some developmental dangerous God, an Old One angry and spitting the energy of destruction at us, and it felt like we were being led in to observe it’s humbling, with the cage always hinting at it’s destructive power, the power of life itself.

An excellent concept, in a superb venue which somehow is less than its parts, but again, astonishingly weird and it’s got to get some festival brownie points just for its close up views of the coils lightening-like plasma brush discharge!

Play until Sunday, May 20

To book or for full details of the event, click here: