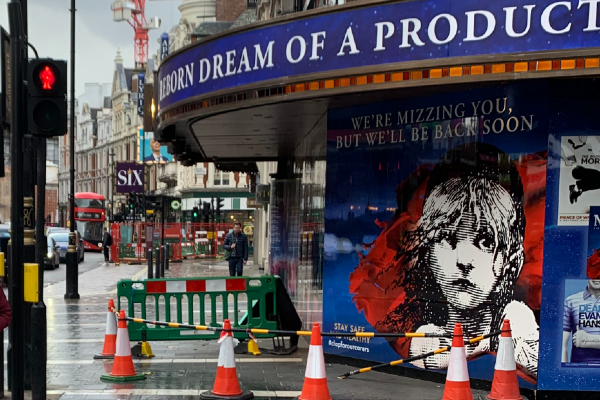 A trip to London nowadays to see a show or two is not what it was. Masked up on both Brighton bus and Thameslink train I realised that people’s compliance with rules and even laws is variable. Quite a few on bus and train don’t wear face coverings. Though you’re supposed to keep them on inside the station, many don’t .

Taxi rides now  require  them and I always comply but drivers seem fairly relaxed if  you do or don’t, feeling protected as they wear them and are usually behind solid Perspex.

I stay at the Holiday Inn, Regent’s Park – other chains are available – and here the level of safety is sky-high. Foyer doors are locked and ringing the bell gains you admittance – though once you have your room keycard you can open the outside door yourself. The place seems very empty and I’m told it’s currently operating at 27 per cent capacity.

There’s an abundance of hand sanitiser stations, Perspex at the reception desk and only one bubble allowed in the lift at a time. Masks are compulsory everywhere except when eating and drinking in the bar. The breakfast room is deserted and if you want a cooked breakfast, you pre-order and collect in carrier bags to take back to your room.

Out and about I walk or get pre-booked taxis – I wouldn’t go anywhere near the Tube and buses seem to be over-crowded often. The streets, particularly in Theatreland are largely empty and many bars like the iconic Admiral Duncan have not re-opened.

I’ve not had many eating outings in London since lockdown but Balan’s Cafe in Old Compton Street and my favourite Italian De Martino’s in Great Portland Street both feel safe and secure.

The few venues I’ve attended to review shows have all been extremely good at the social distancing and other rules. The Eagle Garden Theatre at Vauxhall is technically outdoors, but now protected from the elements by a canopy. Inside the bar your temperature is taken on arrival and track and trace is in place. Masks are not needed in the bar but they are in the garden and seats are correctly spaced, though the actors are sometimes very close up to you.

Nearby at Above The Stag, the precautions are even more meticulous and you can get at-seat drinks in the auditoria and alternate rows are blanked off and groups of seats reflect your bubble.

I wonder how large shows like Jamie and the concert version of Les Mis will cope – with many performers on stage and several hundred audience members in where access is via  Victorian narrow corridors.

My theatre critic colleague Mark Shenton  recently started a bit of a twitter storm when he posted photos of a performance at the Palladium showing each row filled, very little distancing and many not wearing masks. He noted that food and drink can be delivered to your seat, and one woman nearby spent 45 minutes eating some crisps without a face covering. The theatre has denied any breaches. Mark’s photo evidence is in this article.

One bugbear of mine is the plight of single theatre-goers. I only ever want one seat and many venues are offering very few single seats for obvious reasons – this needs to be thought through. I also wonder about performance times. With a 10pm curfew , it’s almost impossible to eat out after a show and I wonder if the theatres could help their nearby restaurants by having some 6:30 pm shows.

So far in Brighton most shows have been in the open air and the Warren Outdoors – now removed – was pitch perfect in its safety measures with lots of checks and well-spaced tables and benches.

I have not yet ventured to small indoor venues in Brighton – except bars – and I wonder about their viability if current restrictions or even more severe ones continue for some months past Christmas. The LGBTQ+ bars I’ve visited – Legends, the Amsterdam and Camelford Arms have all adhered closely to the ever-changing regulations but are obviously attracting much smaller groups and therefore less revenue. I wonder what Christmas will bring.

I’ve got a handful more shows to review in the coming weeks and I’ll keep your posted in the reviews about how safe I felt.

But if you’re vigilant and confident, then go out and support hospitality businesses – they need you.