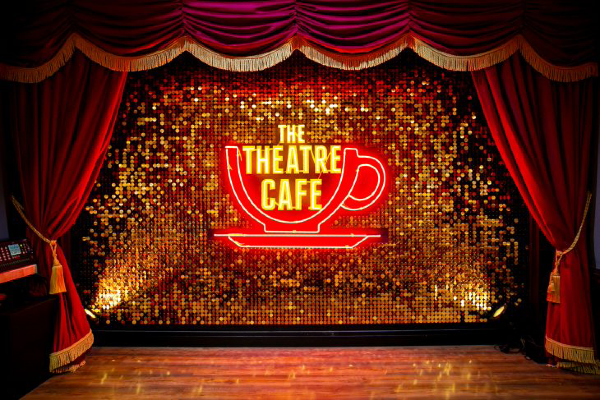 In the heart of London’s Theatreland is a unique venue  that during lockdown is bringing musical theatre alive . It’s the Theatre Cafe which in normal times sells theatre tickets, merchandise and coffee and cakes .

But since lockdown, with its tables bereft of customers ,  it’s joined up with Blanshay Productions to provide much-needed work for performers and a rare treat of close-up musical theatre performances that make us remember just what we’re missing.

Producer Adam Blanshay, Olivier-award winning  director/choreographer Bill Deamer and musical director Michael England have just released their 5th half-hour offering so it’s a good time to look back over their series and also talk to the creative team via Zoom.

Episode 5 ,  a tribute to Broadway Classics ,  was produced under the most stringent  lockdown conditions but nonetheless tugs at our heartstrings, leaving us begging for more of the business that is show, as the lyric goes.

But first , I’ll look at episodes 1-4 , produced last year in and out of lockdown.

Eposode 1 ,   starts with the sweet harmonies of “ Coffee In a Cardboard Cup “, served up by the central singing/dancing quartet that are the Cafe 4 – of whom more later.

Other highlights  include: Lucie Jones, with a soft, pure and gentle rendition of Maybe This Time, an enchanting Little Shop of Horrors moment with Carrie Hope Fletcher and Oliver Ormson, and an electrifying leather-clad  Jodie Steele, on the cafe roof  belting out Heaven On Their Minds.

Back indoors, in lounge mood, the incomparable Jenna Russell drinks to The Ladies Who Lunch – if only we could !

Bradley Jaden and Sophie Isaacs conjure candlelit evil in Life After Life from Dracula The Musical . Never mind his blonde victim, I would have followed Bradley’s Count D.

Then along comes the powerhouse that is Ria Jones with The Last Midnight – truly mesmerising.

Another spine-tingling moment follows as Josh Piterman plays both Jekyll and Hyde , prowling St Martin’s Lane at night , a soaring and stunning performance. And  Trevor Dion Nicholas and the Cafe 4 give us the Time Warp – camp dear ? Who dear? Them dear.

So let’s dwell on the quartet – Alyn Hawke, Emily Langham , Sadie  Jean-Shirley and Alex Woodward. They are young, fresh, energetic and they sparkle at every dance step and sung note.

Linzi Hateley was an  unknown 17-year-old when she was cast as the lead in the ill-fated Carrie , alongside Broadway legend Barbara Cook. Here Linzi exorcises the past by singing Cook’s main song and it’s a triumph.

Episode 3 majors on rock musicals , giving us hippy Aquarius, Forgiven from Jagged Little Pill and a stunning Gethsemane from Rob Houchen being crucified in a deserted  Trafalgar Square at dawn .

Aisha Jawando is a fiery, not-to-be-messed-with Acid Queen and Alex Gaumond is a   hypnotic Marc Almond look-alike in the druggy Le Monde Est  Stone from Starmania .

Les Mis and Phantom star John Owen-Jones is a full-on rock star in Chess’s Pity The Child . Episode 4 is a homage to the Christmas holidays , which may seem strange to watch in Spring but it features recent graduates from Arts Educational singing  Seasons Of Love, with its poignant lyric “ how do you measure a year? “, making you remember the plight of those just coming into a profession decimated by the pandemic .

A Brand New Day, from The Wiz, takes us to the stage of the deserted Duke of York’s Theatre next door – reminding us again just how much we miss a darkened auditorium .

And the best is last :  Episode 5 , just released, is a fruit bowl of Broadway goodies – everything from Freddie Fox’s evil , androgynous MC in Wilkommen, through Gary Wilmott’s pared down Luck Be A Lady, to the Cafe 4’s lockdown lament  Coffee Break.

Alyn Hawke and Emily Langham give us  a charming song and dance Put On A Happy Face and Bonnie Langford is a high-kicking bundle of energy  in a glitzy red jumpsuit , in I get A Kick Out Of You. Mazz Murray  gives us feisty full-throttle Mamma Rose in Everything’s Coming Up Roses which apparently got Mr Sondheim’s personal approval .

And the season ends with an anthem of hope, community and resolution as the towering voice of Marisha Wallace  soars out from the outdoor roof terrace of the National Theatre – promising us good things to come in the future.

Throughout Bill Deamer uses every nook and cranny of the venue, the street and alley outside and even the roof. His direction /choreography , assisted by Thom Sutherland on episode 5 , is a joy to watch.

In a special Q and A session , it was obvious  from the creative team that their aim was to bring clear  narrative out of each song chosen and to base themselves at the theatre cafe but spread out to show the joys of London life which is so sorely missed.

There are plans for a Rodgers and Hammerstein  episode and international  distributors are interested in giving  the Theatre  Channel a wider audience – Hooray and Encore, I say.

You can pay to watch individual episodes or  get bundles for a discounted price – go to thetheatrecafe.co.uk

Check their site for occasional Sunday night live shows too.  Some of their proceeds go to support the profession in these uncertain times, so another reason to sign up .