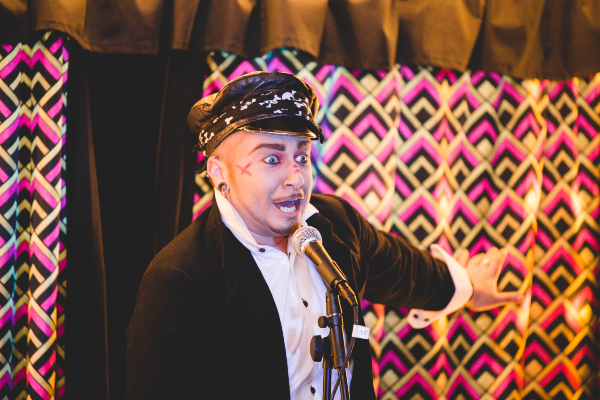 Born in Germany to an army   family,  young  Lucy Jane  Parkinson travelled  across the UK from camp to  camp and attended lots of different schools, and often spent her  lunch hours doing assault courses. So a discipline of routine was in-bred as was her desire to be a performer.

She studied contemporary theatre performance at Manchester Metropolitan University and went on to do a Masters degree in contemporary  performance making at Brunel. Her interest lay heavily in gender and identity – a clue to her later career.

To pay the rent she became a security  guard , often at venues like the Black Cap, Camden where she saw lots of drag – “ Baga Chipz and Sandra were my first influences,” she tells me. She had invented a persona LoUis CYfer as part of her Masters course- “ I was struggling with my gender and identity – I didn’t know what was going on  .” It clearly worked as a character because she was the first drag king winner of the Drag Idol contest. “ Everything went mad from then,” she adds.

LoUis developed into a real Yorkshire guy with a big contradictory appearance – feathers and leather, a character who pointed up the privileges of masculinity.  And Lucy has continued to innovate, using the technical set-up of projection mapping to  present virtual shows with exciting backgrounds. She describes it as “ remote cabaret , and it’s been handy in lockdown. But Lucy is thinking of developing it further with live performances.

But the drag king work is not the only string to her bow.

A highly successful one-person show Joan saw her re-telling the story of Joan of Arc , making her non-binary or gender fluid, telling her story  to the vision of St Catherine which appears to her, and splicing it with drag king cabaret.  It was a startling concept and a great success.

The show toured Australia  and Malta and won a Fringe First award at Edinburgh. It ran on and off for five years and toured  pubs, a big top and  schools.

At the Young Vic she presented Communion – a show where queerness is assumed to be a religion. “ I’m looking at further developing that idea,  maybe as a digital online series, ‘ she says with a smile.

Lucy hit the headlines while touring in the play Rotterdam with her girlfriend Becky. (read the Gscene review from April 2019 here)  At Southampton Pride, they were walking hand in hand in the street on their way to a matinee when they were hit by something thrown from a car. The show had to be cancelled and the story became news. “ There was an an outcry at the time because it was during Pride, I was shocked that could happen.”

She sees much of her work being about the strength of being in a community and is concerned, about issues of  people’s mental health.

On the subject of gender and identity she is clear: “ I don’t mind if people call me a lesbian; Iv’e got so much else to think about. There’s definitely been a shift in attitudes about names we call ourselves  in the last two years, and in what stories get told. I’m concerned about what’s happening to trans people.

“Rather than ask questions people make assumptions . I prefer to think of being fluid and free. Sometimes I feel really feminine  and sometimes I’m masculine.” She’s certainly at ease with her personality and what she projects on stage. And she hopes to produce  a kind of mocumentary of LoUis, with a full fake history.

Drag kings have taken off as a phenomenon on the queer cabaret circuit in the last few years but there’s a long illustrious precedent for them going back to the music halls of the 1860’s and later. Vesta Tilley, the highest paid entertainer of her time had big hits with songs like Jolly Good Luck To The Girl Who Loves a Sailor and ofcourse Burlington Bertie . Hetty King was a sensational hit with her song All The Nice Girls Love a Sailor . Interestingly though some of these male impersonators were lesbians, some were married women who shunned non-conformity and even condemned homosexuality. But back to LoUis…

Lockdown came just as she was due to appear at Shakespeare’s Globe as the maid in Twelfth Night and an immersive version of  Metamorphosis – delayed now till 2021.

As I was writing this article  news came that LoUis will appear alongside drag queen royalty in Death Drop at the Garrick Theatre, London in December.

Whatever happens it’s sure to be another adventure  for Lucy in her super-varied career.

Check out their insta here