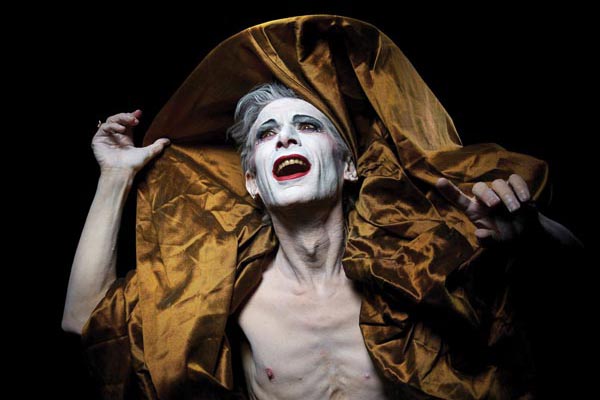 “I knew by the age of 13, in the early 1970s, that I was gay. I grew up in Chichester where being gay didn’t exist. I twigged in that strange way you do that this wasn’t something I could talk about,“ says Neil adding: “It was a secret life – a terrible way for a child to grow up. Because of the incredible work done on gay rights I now live in a country where young queer kids don’t have to go through that.“

Talking to Neil is like clinging on to a very speedy rollercoaster. His energy, passion, commitment and clarity of thought shine through his conversation. He is surely one of the most prolific creative minds of his generation – equally at home he says at Bethnal Green Workingmen’s Club and on stage at the Royal Shakespeare Company.

His escape route from adolescence was, he says, a combination of cottaging and the hidden world of books in libraries.

Arriving in London in 1982 he had what he calls “an amazing time. It was the era of Betty Bourne’s Bloolips theatre company, Leigh Bowery, the films of Derek Jarman – and I stayed an enfant terrible till I was 55,” he jokes.

His overriding aim has always been to say that queer art has its place. “All I ever wanted to do was make my work and for it to be in the mainstream.“ He is probably the only person to have his work onstage at both the Royal Vauxhall Tavern and the National Theatre in the same week.

His output has been enormous – five novels, dozens of plays and work for film and television as well as a searing six-hour reading of Oscar Wilde’s De Profundis. His latest novel The Disappearance Boy is a strange and tender take on queer courage set in the tatty backstage world of a 1950s variety theatre. On stage he has ranged from Shakespeare, through Wilde to Somerset Maugham and Albert Camus.

He is looking forward to having his  production of Medea on at Brighton Festival later this month. It’s a show he has adapted, translated and directed – a sure-fire success everywhere it has been seen. It’s a highly charged solo performance and a modern take on the Greek tragedy, starring French actor, singer and dancer Francois Testory.

He is a great and extraordinary performer. He found a modern French version by Jean Renee Lemoine and asked me to translate it into English and direct with the author’s blessing.“

Francois trained as a dancer with Bejart and performed with Lindsay Kemp. He has an extraordinarily powerful singing voice with a big range. He’s a stunning looking man but amazing as the female murderer Medea. Name your worst fear – Medea is it. She’s an outsider, a foreigner, a Barbarian.“

Neil sees a read-across to the Brexiting UK today, and attitudes to immigrants.

“Medea is a sexual outlaw; she’s incestuous, the murderer of her own children – beyond the rule of law – and she gets away with it. A woman who does what she wants and ends in triumph. It’s a dangerous piece.“

But then that’s Neil’s signature – the controversial, direct approach to sexuality and freedom.

Returning to the subject of gay rights and freedom, Neil accepts that many strides have been made in his lifetime.  “Now you can call the police and they will take action about homophobic behaviour but it’s too simple to say that it’s all over. It’s only yesterday that we got our civil rights – adjusting our lives will take a very long time.”

And he says that public gay behaviour, like he and his long-term partner holding hands, would be acceptable in Soho but not so in rural Lincolnshire. “Reported violence against trans people is up by 80%, and lots of Commonwealth countries, former British colonies, have anti-gay laws on the statute book. We have to do something about that.“

With an OBE, honorary doctorates, and acclaimed work at both the National and RSC, is he now an establishment figure? “That’s a laughable suggestion. The National is no more important to me than Bethnal Green Workingmen’s Club. I’m not respectable, or growing old gracefully – Medea is not a sign of respectability.

Medea – Written In Rage is at The Theatre Royal, Brighton on Saturday, May 26 at 8pm.