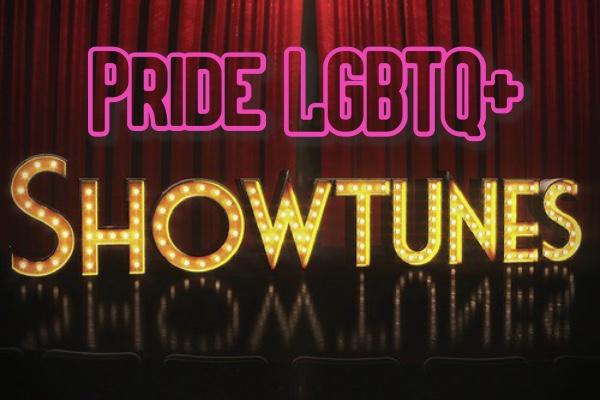 In this virtual  Pride period , I’m looking at my back catalogue of Broadway LGBTQ+ show tunes And in these days of equality I’m not ranking them  !

So as they say on Strictly “ in no particular order “ –

What About Love? ( Stephen Bray, Brenda Russell and Allee Willis), from the musical version of The Color Purple, the award-winning Alice Walker  novel, is more  than just a story about an African American woman’s struggle for emotional and and spiritual freedom. It also features a deeply moving lesbian relationship betweeen main characters Celie and Shug. It’s ground-breaking not just because it’s a two-woman love song but because they are women of colour.

Unlikely Lovers ( William Finn). Starting as a short piece March of the Falsettos and morphing into Falsettoland, it’s at first sight a bleak story about life and death in the face of AIDS. But in the despair of the dying patient’s hospital room Finn gives us a marvellously upbeat love song  between  the two male leads , as they sing ” let’s be scared together. Just stay right here… I love you “ A magic duet.

Ring Of Keys ( Jeanine Tesori and Lisa Kron) is from a much under-rated musical Fun Home. This is a song about identity when the pre-teen Alison sees what she describes as a “ butch lesbian “ for the first time. It avoids the obvious comic pitfall and shows tenderly the growing lesbian awareness of this youngster.

I Am What I Am ( Jerry Herman ) from La Cage Aux Folles  needs no introduction  on the scene and is quite frankly over-performed , but in 1983 it broke new ground on Broadway at a time when LGBTQ+ rights were still largely overlooked. It’s a mighty anthem and sung nowhere better than by the great George Hearn.

And last but not least – You Could Never Shame Me ( John Kander and Fred Ebb) from The Kiss Of  The Spiderwoman. Forget the purring evil of Chita Rivera’s spidery femme fatale. One of the best songs is from the drug-crazed camp window-dresser Molina , in a cramped Argentine  jail, who sings with his mother whom his dream conjures up. It’s touching, heartfelt and beautiful.

Play them – you won’t be disappointed . Happy Virtual Pride !

and one more time for love, for unconditional love to  all of you, on this most unusual Pride. Come-on you know the words…