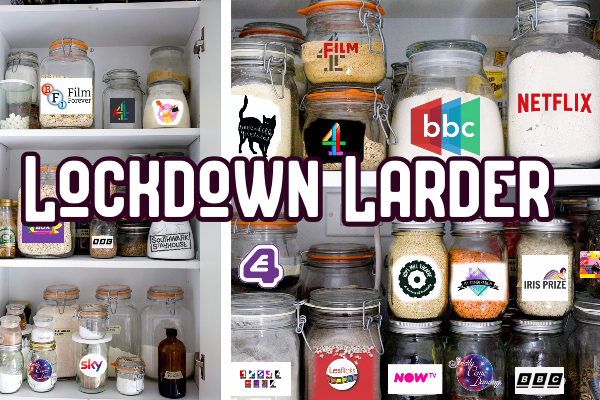 As we sit in lockdown 2 , which may or may not end on 2 December , it’s back to streaming sources for our entertainment. This series will aim to give you a highly biased view of what might be worth watching on platforms like BBC iplayer, All 4, Netflix and YouTube as well as some streaming from theatres.

On  Netflix, there’s a wide range of LGBTQ+ films on the platform including Elisa and Marcella, Alex Strangelove and Disclosure – more on these  in the next larder.

Also on Netflix in November comes  the highly anticipated latest series of the Royal soap The Crown, which this season features the lives of Margaret Thatcher and Princess Diana – a must-watch , if not  for its historical accuracy. Ryan Murphy  has a number of big hitters here too, including the wonderfully inventive series Hollywood, starring the fabulous Broadway diva Patti Lupone, and also the remake of 1960’s iconic queer play The Boys In The Band , both reviewed by Gscene.

All 4, the catch-up branch of Channel 4 is showcasing the recent  15 finalists in the best British short films category of the LGBTQ+ Iris Prize film festival. I watched the first grouping of films and they are varied, engaging and interesting.

Just Me is a searingly honest look at what happens when a hetero relationship is threatened when the female partner Jasmine tries to explain to her boyfriend that Jas is now gender fluid. It’s a close-up and very naturalistic portrayal and shows signs of reconciliation as its brief narrative ends.

On The Red Hill tells the true story of George and Reg, two ageing gay men who had to spend  most of their lives in a secret and illegal relationship, before the law was changed. It’s told by Mike, an author who has inherited their isolated Welsh home. It will resonate with those of us over a certain age and be informative for those who take their queer rights for granted.

My God, I’m Queer tells the stories of a selection of gay Muslims – both men and women – and the joys and problems of being out. It’s moving, sad, brave and shows us that despite our individual cultures and the barriers they can create, we are one community.

Very different but totally absorbing is Queering Di Technolojik. It tales a bit of getting into but basically its a futuristic picture from our long-long future selves , who send a warning message to us and our endangered, divisive world. With a strange kind of techno-grammar and animation, it’s a cautionary tale of what might  be in the future if we fail to heed  their interplanetary warning – brilliantly done.

The BBC still has the wonderful Staged and Talking Heads series on iplayer , and the latest series of His Dark Materials on both Freeview and  iplayer. If you don’t know, Staged is mostly a two-hander by David Tennant and Michael Sheen trying to rehearse a play. Talking Heads are marvellous and often dark comic monologues by Alan Bennett, amid if you don’t know  the dystopian world of Dark Materials, where have you been?

BBC streamed films include classics like A Star Is Born and The Bandwagon . The first – a Judy Garland classic, has been re-mastered from its 1954 original but the very annoying issue is that in so doing the film editors managed to lose a number of scenes. So here as a replacement we get still photos and the original audio of James Mason and Ms G. Those bits really don’t work but the wonder of The Man Who Got Away and I Was Born In a Trunk more than make  up for it.

The Fred Astaire vehicle The Bandwagon ( 1953 ) ,  also starring Cyd Charisse,  has terrific numbers like By Myself, the camp That’s Entertainment , the downright silly Triplets, and the enchanting Dancing In The Dark. And some great one-liners by Comden  and Green like Fred to  Cyd: “ I’d say you were more plain rather than ugly “ and the apt “ Let’s keep our heads- it’s only a show”.

The adventurous Hope Mill Theatre in North West England has a revival of rock musical Rent the musical, which was  due to run in November/December before being hit by this lockdown, but you can support the theatre and its staff by watching a streamed performance of the  musical which is loosely based on La Boheme. Tickets at: hopemilltheatre.co.uk

Theatres streaming new works include two  Southwark Playhouse musicals that look intriguing – The Fabulist Fox Sister and Public  Domain . The first is set in New York in 1892 and is a one-woman show about the inventor of seances  and has parallels to our era of approximate truths.Details at www.ffsmusical.com

The second – Public  Domain – takes verbatim dialogue from the internet to tell a tale both mesmerising and terrifying. They are live streamed on 4/5 and 11/12 December respectively . Details at www.alpmusicals.com

And you mustn’t miss the latest series on BBC 1 and iplayer of Strictly – important if for no other reason than to support and marvel at the first same-sex couple, including the energetic and loveable Olympic boxer Nicola Adams – I predict a final place, Craig-willing !

Next time in the larder – more Iris prize treats, a peek into the BFI and Netflix catalogues of LGBTQ+ films, and my recipe for a hearty winter beef and venison paprika casserole. Don’t miss it.