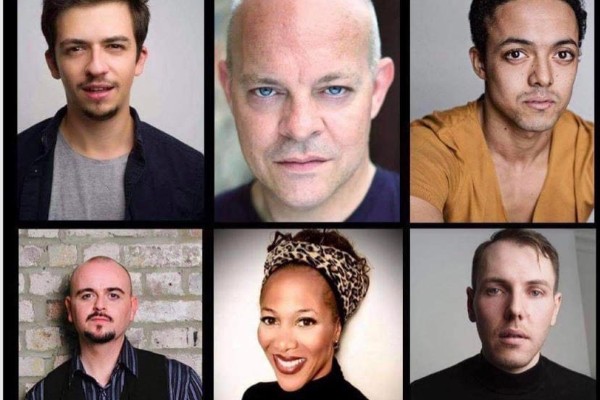 When you chat to James Cole – albeit via social media – you get a firm impression of a young writer who is determined to find positives out of his troubled past.

This coming weekend, Sunday 23 August you have the chance to see and hear his new play Star Man, and help him get it from page to stage.

I had the privilege to sit in virtually on a Zoom reading of the play recently  and he’s assembled the same glittery cast to  read it again this Sunday.

It’s the story of Ben, (Jasper William Cartwright) a deeply troubled young man, whose serious drug addiction leads to a hallucinatory trip backwards and forwards in his short life and revealing bit by bit his mind and body-shattering childhood. Cole manages to merge past and present and even some of the central characters sometimes morph from one identity to another.

Ben’s surrounded by friends , lovers and family who are all desperately trying to help him in their own way and Cole has created some very human characters – Tony ( Harry Edwin) the on-off love of his life, Dionne ( Kim Tatum),  his slightly detached mother who tries her best against the odds, Kennedy, ( Neil Summerville)  a nicely drawn semi-comic father- or auntie figure of a middle-aged drag queen who feels responsible for Ben’s welfare.

And then there’s Cole’s brilliant two twists – his caring doctor veers backwards and forward into a character Cole calls Him ( Jaymes Sygrove) – an evil, manipulative man, with sexual and drug-related controls over Ben – a truly horrific but realistic portrayal. And then there’s a sort of safe escape  hallucinatory figure of an astronaut, whose existence on the edge of a black hole in space is a powerful metaphor for the future in the play. Narrated by David E Hull-Watters

28-year-old James trained at the Miskin Theatre, Dartford and also studied at Dartington and Ba Spa Universities , but dropped out of both institutions. His first play , Something Bad is Happening In The Streets had a successful run at Camden Fringe and a number of colleges. After dropping out at Bath he created the drag character Bambi Boo and was mentored by fellow drag artiste Rose Garden. “ I learned a lot about drag and life from Rose’” he tells me.

“I chose Bambi because I lost my mother when I was very young and Boo as it was often the expected audience reaction !”

Four years on the drag circuit eventually seems to have taken its toll – “ I fell  into dark times and found ,myself in a world of drugs, missing gigs and being an all-round arse” he says explicitly.

But coming out the other side of this troubled period James trained as a counsellor and educational professional and was inspired to write Star Man. “ Ben, the central character, really started from me and a lot of his pain is something I can totally identify with and the fact he had gone through so much, I needed him to live on in some way perhaps to give myself the faith that I can too. After multiple suicide attempts and finally coming out about my trauma, things began to get better “

” Once we talk about theses things that are troubling us or have happened to us, it opens the door to the future and you step out of the cluttered room of the past .”

Being half Jamaican and half Italian, James wants his next writing project  to be about race – probably  the 1958 Notting Hill race riots.

Whatever  his subject it seems to me he will tackle it head on with care, humanity and total honesty .

You can watch the latest fund-raising reading of Star Man on Sunday 23 August. Tickets at outsavvy.com  or via to twitter #starmantheplay