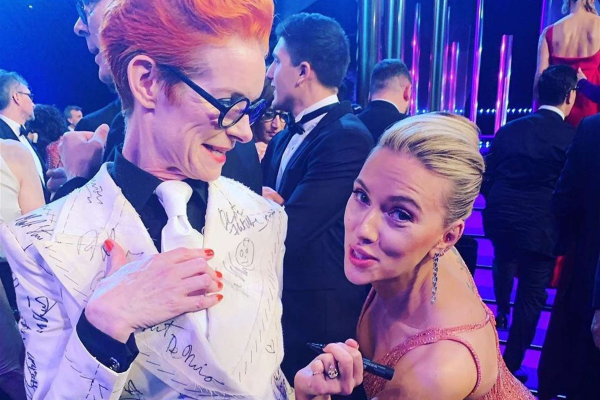 Jarman transformed a Victorian fisherman’s hut into a sanctuary of art and imagination.

Oscar-winning designer Sandy Powell gained a Bafta nomination for The Irishman, decided to design an outfit which would benefit the Art Fund appeal to save Jarmens cottage. Powell said: “Then I thought: ‘It’s like a blank canvas. I could go armed with a pen, and get signatures. And maybe we could auction it.”

“His courage is not just important as a piece of history, but also to preserve his legacy,” said Powell, who was friends with Jarman when they work on his film Caravaggio. “It is so important Derek doesn’t get forgotten, and that he can continue to inspire young film-makers, artists and writers.”

Jarman moved to the cottage in 1986, turning it into an artwork in its own right, filling the garden with sculptures made from flotsam and jetsam. After his death in 1994, from an AIDS-related illness in London, aged 52 the house was cared for and maintained by his long-time companion Keith Collins until his death two years ago.

Powell spent the eventing at the BAFTAS asking people to add their signatures to her outfit. Ending up with more than 100 starts of stage and screen.

Art Fund has launched a public appeal of £3.5 million to save Prospect Cottage in Dungeness, Kent – the home and garden of late visionary filmmaker, artist and activist, Derek Jarman.

Art Fund, the national fundraising charity for art, needs to raise £3.5 million by 31st March 2020 to purchase Prospect Cottage and establish a permanently funded programme to conserve and maintain the building, its contents and its garden for the future.

Derek Jarman, one of the most influential figures in 20th Century British culture, iconic filmmaker and LGBTQ activist, bought Prospect Cottage while visiting Dungeness, Kent, in 1986, transforming a Victorian fisherman’s hut into a sanctuary of art and imagination.

How will Prospect Cottage be conserved if the appeal money is raised?

Through a partnership between Art Fund, Creative Folkestone and Tate, the campaign will enable continued free public access to the cottage’s internationally celebrated garden, the launch of artist residencies, and guided public visits within the cottage itself.