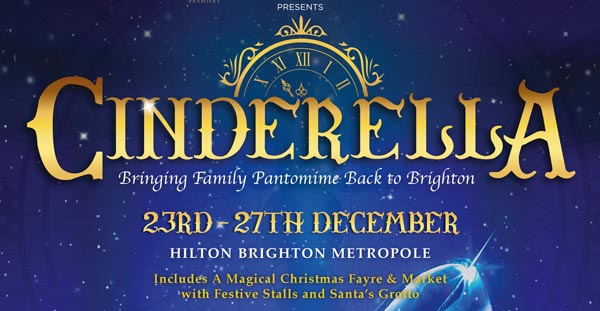 Family pantomime will return to Brighton this Christmas, with a spectacular new production of Cinderella starring a West End cast to be announced shortly.

This traditional family pantomime will take place at The Hilton Brighton Metropole from December 23-27 (no shows on Christmas Day).

Hove based production company, E3, who produce events such as Chestnut Tree’s Snowman Spectacular Ball and The Wilderness Wonder Ball for The Sussex Wildlife Trust, are collaborating with the city’s performance arts college, The Brighton Academy, to produce the show, that producers are promising will have the largest panto cast in the UK.

As part of the production, they will be building a bespoke state of the art theatre with tiered seating and a large stage within the Oxford Suite at the Hilton Brighton Metropole that will accommodate up to 750 people for each performance.

Founder of E3, David Hill, who will co-produce and star in the Show, said: “Brighton and Hove residents lost their traditional family panto over ten years ago and we want to bring it back. If you are a family living in the city, you need to travel to Eastbourne or Worthing to see a pantomime with your children, so now with three car parks on the Hilton’s doorstep you can come and see our magical show”.

The producers will also be launching a Search For Cinders campaign, a countywide talent search to cast Cinderella for the show.

Families will also enjoy a Festive Christmas Fayre and Market before and after the show which will include Santa’s Grotto, merchandise stalls and lots of hot and cold seasonal food options.