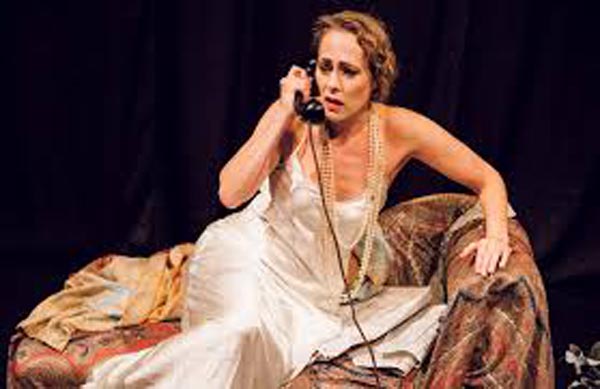 Melinda Hughes is an internationally known lyric opera singer who has diverted from her main career to create the real-life role of Margo Lion – supposed lover of Marlene Dietrich, ballet dancer from Constantinople turned 1930s cabaret chanteuse in Berlin.

EVERYTHING about the tale is unlikely but enchanting. Singing the songs of Marcellus Schiffer, who Margo married, she charts the rise of Nazism, with an initial naivety that soon turns to fear. Her Sally Bowles-like innocence is appealing if worrying. “They were Jews” she says as people are taken away – “Aren’t we all Jews ?”

But her denial of the protest, arrests, murders and race hatred doesn’t last long. And her escape to cocaine, cheap booze and a topsy-turvy love affair and marriage leads to her early-life crisis. But as she says towards the end of the show “I stumbled on”.

It’s a roller-coaster Goodbye to Berlin cabaret show that captures the moment perfectly with its authentic 30’s songs .

Hughes plays Margo with coquettish delight and her operatic tones soar above the piano and double bass – sometimes perhaps too good for an also-ran cabaret performer. Singing half in German and half in English the songs are the bitter-sweet, political heart of the show and Hughes pulls them off with great gusto.

And for once there is a happy ending. Like her friends Brecht, Weill and Dietrich she too escapes the war – to return in the 1970s to her beloved Berlin – as she sings earlier “no more blame, no more shame in Berlin . Be sincere and be queer in Berlin.”

Margo is playing at the Assembly Rooms , Edinburgh throughout August.