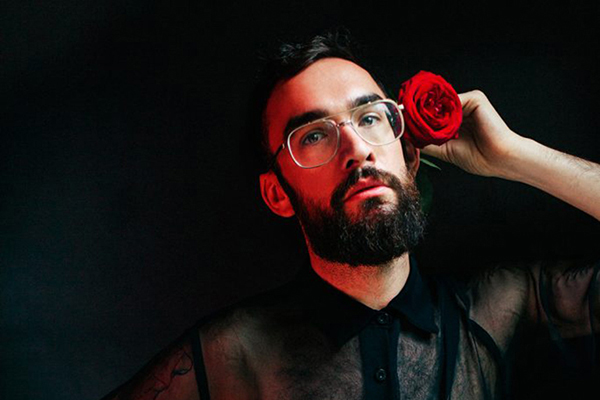 Harry is an entertainer, performance artist, international mischief maker, internet provocateur and some time exhibitionist from Blackpool. Hailing from a town synonymous with traditional end of the pier showbusiness, trashy gay bars and drag shows, has clearly left its mark and it is then of no surprise that when not touring the world Harry often makes Brighton his home. Many first became acquainted with Harry performing in Briefs: Close Encounters, which had two sold-out runs in London and has toured all over the world.

Sex Education, Harry’s first solo theatre and multi-media piece, debuted at Brighton Fringe, winning the LGBTQ Award, and it’s this show he has already this year taken to Sydney Mardi Gras and is now touring the UK following its successful Edinburgh Fringe premiere in August 2019. At the Brighton Fringe last year he premiered his series of 14 individual eight-hour performances, The Fortnight – a veritable sequined toolkit of drag, dance, lip sync, live tattooing and a Liza Minelli homage. Of course.

How does it feel to be Harry Clayton-Wright at the moment?
I’m not going to lie, it feels incredibly awesome. I’m so thrilled that there’s been such love, support and interest in my work and the projects I’ve been part of. I put a lot of time, energy and dedication into my craft, but I love what I’m doing so it doesn’t feel like work. I can only hope that the opportunities keeping coming and I can continue to work with people I respect and admire.

How does it feel to be thought of as an LGBTQ+ icon?
I’m beyond thrilled to be thought of that way. I mean, I try to be as iconic as possible with my work so I’m glad it’s translating. But I’m definitely a baby icon, because the trail has been blazed by some incredible people who’ve gone before me and are truly Icons with a capital I.

Who are your queer/LGBTQ+ heroes?
Artistically, John Waters and Divine are huge inspirations. Marsha P Johnson, Liza Minnelli, Freddie Mercury, Sylvester, kd lang, Janelle Monáe, Keith Haring, Elizabeth Taylor… You may have to stop me as the list goes on.

I’m here on the shoulders of those who have gone before and will continue to push forwards and be the shoulders for those after. I’d say there’s been a boom [in queer performance], especially the increased visibility of trans and non-binary performers, which is so necessary. Social media has widened access to independent queer performers, which isn’t controlled by mainstream media and gatekeepers who decide what they think is or isn’t popular. This has allowed for way more voices to be heard. As an aside, certain major cultural institutions could do with programming queer work year- round and not just during Pride seasons.

Sex Education draws upon relationships with your family and past self. What would Harry 2020 say to Harry 2010 and 2000?
Your weirdnesses and quirks will be things that are celebrated when you truly own your power. You are not compatible with hardcore partying – sobriety will be the best thing that ever happens to you. As much as you love your work and career, make time for a personal life and meaningful relationships. Get rid of shame as soon as you can. Don’t wait for the permission to be an artist, take that control and run with your vision – people will catch on eventually. Be kind to yourself, you deserve it.

You’ve spoken openly about your own journey with alcohol use and you’ve now been sober for some years. Alcohol seems to be an ever-growing part of our LGBTQ+ scenes. What would you say to those LGBTQ+ Pride organisations who seek out and promote alcohol sponsorship?
I think it’s about Prides acknowledging their wider responsibility to the community, and being aware that if an event or organisation has alcohol sponsorship, do they provide sober spaces as well? Because that would be awesome and I’d love to see it happen. LGBTQ+ people need to be given those choices and that alcohol isn’t just the only way of having a good time. These spaces can be quite full on for people in recovery and who abstain from drinking but still want to protest and celebrate.

There has been a significant expansion in sponsorship for Pride events with some criticism from LGBTQ+ groups? What say you?
Rainbow capitalism is dangerous when brands or sponsors are riding on the coattails of the LGBTQ+ community but not backing up their words with actions. It’s important for Pride events to be making sure that sponsors are doing the work and avoiding ones that actively harm some of the most marginalised members of our community.

In Sex Education, you speak both movingly and almost practically about a range of experiences from an upsetting and traumatic sexual encounter to a self- directed approach to sex education. How have these experiences shaped you?
Sex positivity is incredibly liberating and it’s been such a massive part of my work. The show features an interview with my mum where we finally have the chat about sex, which has unquestionably brought us closer together. I’m so grateful for that. Posting my nudes online has relinquished a lot of the shame I had in relation to my body. Talking about my trauma has been cathartic and important and allowed me to really connect with others. Making sex positive and explicit performance work has provided incredible opportunities, meaningful conversations and empowered and inspired such freedom. Throw sobriety into the mix and I’d say I’m a much better lover too.

Keep an eye on Harry’s social media for news of when the Sex Education tour resumes.