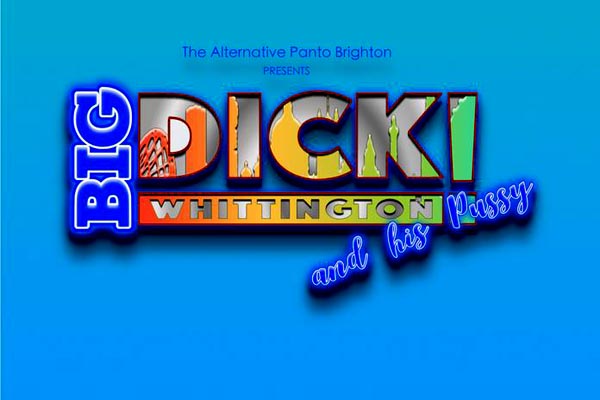 The Alternative Panto Brighton returns, with Big Dick Whittington and his Pussy, a classic retelling filled with double entendres by a stellar cast of Brighton entertainers with a sprinkle of West End and international performers.

DIRECTED and staged by Quintin Young and written by Andrew Stark, this season they welcome, Mrs Moore to the cast, for a couple of guest performances on (April 5 & 7).

Performing in their new home, The Phil Starr Pavilion, part of the B Right On Festival, which will be erected on Victoria Gardens – (The annual site for the Lady Boys Of Bangkok, on Grand Parade).

Will her father Alderman Fitz-Tightly (Christopher Howard) put a stop to that and marry Alice off to the Sultan of Gran Canaria to save his shop?

Can Dick’s Pussy (Miss Jason) help him keep them on track purrrfectly?

What ever happens Sara-Lee, the cook (Sally Vate) is there to keep an eye on them! That is as long as Queen Rat (Davina Sparkle) doesn’t interfere and get her way of becoming mayor of Brighton town with the help from her her chief Ratling (Stephanie Von Clitz).

This tale couldn’t be told without Fairy Vape-Juice (Dave Lynn) pointing Dick in the right direction!

Tickets are selling fast, with some shows already sold out – and extra performances added. (If your a group of 10 or more you automatically get a discount, 10 for 9!)