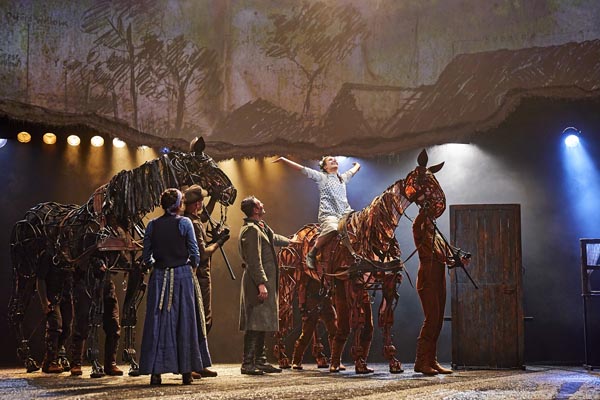 Gscene has a pair of tickets to give away in a competition for The National Theatre’s acclaimed production of War Horse which comes to the Brighton Centre from January 25 – February 10.

The tour of War Horse coincides with the Centenary commemorations of the end of the First World War and follows the production’s enormously successful tour of the UK and Ireland in 2013-2014.

War Horse, which has been seen by over seven million people worldwide, has won 25 awards including the Tony Award for Best Play on Broadway.

Nick Stafford’s adaptation of Michael Morpurgo’s remarkable story of courage, loyalty, and friendship, about a young boy called Albert and his horse Joey, set against the backdrop of the First World War is the most successful play in the National Theatre’s history and features ground-breaking puppetry work by South Africa’s Handspring Puppet Company, which brings breathing, galloping horses to life on stage.

Michael Morpurgo said: “After a few months rest, out at pasture, Joey, the War Horse and his great team from the National Theatre, will be touring the UK again, from 2017 through to 2018 and the centenary of the end of the First World War, taking their show all over the country, to towns and cities, many of them places War Horse has not been seen before.  I am so pleased this is happening; that so many more people will have the chance to enjoy this unique theatrical event. Steady boy, steady Joey. Trot on!”

War Horse is directed by Marianne Elliott and Tom Morris, designed by Rae Smith, with puppet direction, design and fabrication by Basil Jones and Adrian Kohler for Handspring Puppet Company, lighting by Paule Constable, and movement and horse choreography by Toby Sedgwick, with video design by Leo Warner and Mark Grimmer for 59 Productions, songmaker John Tams, music by Adrian Sutton and sound by Christopher Shutt.

Tickets are valid to see War Horse at the Brighton Centre on Thursday, January 25 only at 7.30pm. At least 1 adult must be present (parental guidance suitable for 10 years+).  Tickets are non-exchangeable.

Closing date for entries is December 20 at noon. Entries received after this date will not be counted. Winners will be required to collect their tickets from box office on the night of the show. Any travel and accommodation will not be included in the prize.

To win a pair of tickets email your answer to the following question to info@gscene.com by Wednesday, December 20 at noon.

What is the name of the famous War Horse in the play?