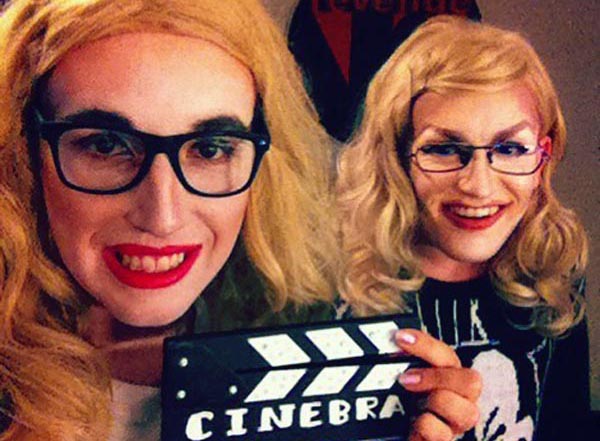 Morgan Fabulous chats with Lydia L’Scabies and Rococo Chanel about their upcoming theatrically inspired production CINEBRA – A History of Horror.

A unique concept derived from both girls love of film and characterisation, the show is based on socially awkward movie buffs and lead characters Megan and Sophie. You can find them both on YouTube reviewing movies and getting up to mischief.

With Halloween fast approaching, their first stand alone live show is based on classic horror movies from the 1920’s. Both actors come from a theatrical and musical background, and have been on the Brighton scene for a few years now, performing at the notorious Powder Room and FOMO at Revenge and for the first time this year, Lydia was nominated in the Favourite Entertainer (Drag) Category at the Golden Handbag Awards.

The girls decided it was time that Brighton had a little more variety in its drag culture and came up with Megan and Sophie. The characters are based upon exaggerated parodies of teenage movie fanatics and geeks and together they form the duo CINEBRA. An amalgamation of the words Cinema and Bra, for obvious reasons.

Sophie, is just 17 years old and goes to college with Megan. She’s a celiac asthmatic who is allergic to most things, and really likes film history and the movie industry. She also likes big jumpers and her custom inhaler!

Whats your favourite movie Sophie?
Well you’d know that if you watched mine and Megan’s ‘MOVIE TAG’ series on our YouTube channel! Give it a watch, and don’t forget to like, share and subscribe!

What are your plans for the 29th?
Me and Megan feel very passionately about Horror Movies, so as it’s Halloween we’re delivering a performative seminar on the History of Horror!

Why CINEBRA?
We wanted something that sort of rhymed with Cinema and because we’re girls we thought CINEBRA would be funny. We rate movies in ‘Bras’ not ‘Stars’ because they’re just as irrelevant and supportive.

Megan is 17 years old also, artistic and fun-loving with a passion for make up. When she’s not at college doing her A-levels you can find her hanging out in H&M with her friends Abigail or Sophie, who she’s been best friends with since year 4 (IKR). At the moment they are focusing on running their YouTube channel CINEBRA because they really want to get noticed and share what they love with their new friends on the internet!!!

Whats your favourite movie Megan?
I always say the Disney classic The Little Mermaid, because it’s such a good story and I can really relate to Ariel because she’s really optimistic, ambitious and young like me (lol) and obviously the best Disney princess.

What can people expect from CINEBRA?
Like, I mean, obviously it’s near Halloween and it’s about spooky things, so expect to be SPOOKED!! There’s gonna be like blood and guts and poltergeists and loads of information and facts. We’ve been doing plenty of research to give you all the best knowledge on our favourite films!! I’ve been writing some really cool songs for it as well, we’re a bit nervous to sing in front of people but hopefully we will be really good.

Why CINEBRA?
CINEBRA, for me, means like a really good way to just showcase our talents, because in school people always thought we were weird, but now we’re in college we can really show the world what we’re made of. We’re strong, we’re fab, we’re CINEBRA!!! PS also I really want the YouTube channel to take off because Zoella earns £1.12 a minute and imagine what you could do with that.

CINEBRA was first performed as short sketches at Club Revenge during their appearances at the Powder Room which hosts the finest of Rupaul’s Drag Race Alumni and prides itself on being the most creatively motivated show in town and where each resident (Crystal Lubrikunt, Lydia L’Scabies, and Rococo Chanel) comes up with new material either inspired by the headline act, or drawing from current affairs, character icons and sometimes nostalgia!

With plenty of one liner’s, original songs and what I have been told, ‘a plot twist’, the show which is on Saturday, October 29, from 8pm – 11pm, at the Nightingale Rooms above the Grand Central pub close to Brighton Station, and I am assured it is not to be missed.

If you can’t wait until then to see what they have to offer check out their YouTube videos and social media accounts by searching for CINEBRA.