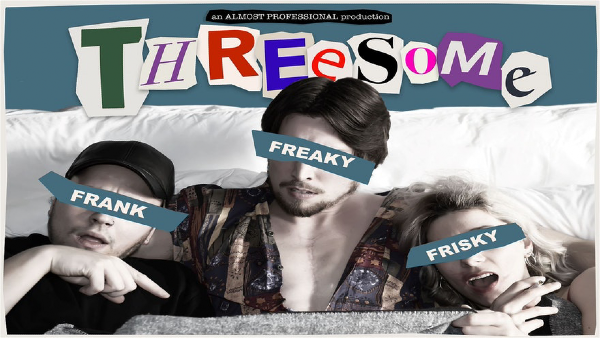 Almost Professional have put together a lockdown Zoom three-hander that starts in a very ordinary situation but rapidly goes elsewhere. Alex ( Eric Silver ) is a downbeat Gay who can’t help but speak his mind , but who also stutters when confronted by awkward or unpleasant situations.

Eve ( Claudia Saavedra )  is an extremely sexed-up flatmate, whose desire for a hot man clouds  her judgement about a potential 3rd person to share their flat.

So along comes Evan, quirky , personable, disarmingly honest . While Eve is totally smitten with him, Alex probes Evan’s past – and off we go into a different and interesting storyline. For Evan (Philip Greenoak ) , abandoned at the door of an orphanage as a baby, has spent 18 year in a religious cult community and admits to being a warlock, practising spells to do people harm.

Oh and did he mention he was brought up violently anti-Gay? Much of the bizarre comedic effects come from this highly improbable scenario , with diversions into Eve’s admission to playing the sexual attraction  game at work to get promotion.

There’s a lot going on here, as you can tell,  and probably too much as some interesting themes don’t get properly developed. Silver, who also wrote the piece , wins the acting stakes , an he often breaks the fourth wall and talks directly to us. His sharp acid wit works well ; Greenoak is great as the  creator of plausible but scary  one-liners , while Saavedra doesn’t quite  pull off the contradictions in her character.

Does Evan get the flat share? Watch the streamed show to find out. Details at brightonfringe.org