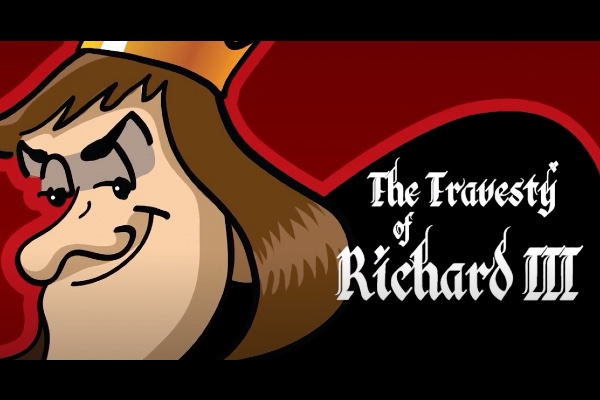 A comedy about the murderous life of Richard III ? “ You’re ‘ avin’ a larf”. Well, yes and there are laughs a plenty in Conspiracy  Culture Theatre Company’s one-hour romp.

All the characters from this parody of Shakespeare are played by two actors – well all except  three. Ian Renshaw and Helen Manners swap personae and gender with high-speed gusto, thanks to clever film editing in this streamed performance.

The show is loyal to the original’s storyline if not always to its dialogue. Ian, who also wrote the show,  is an Olivier look-alike  Richard , as well as old Queen Margaret , a murderer and Richard’s haggard old mother, who owes  a lot to Peggy Mitchell in her characterisation.

Helen plays sundry other queens and Richard’s bolshy sidekick Buckingham, who’d be at home at Millwall Football Club. The style throughout is panto meets Lloyd Webber , with a touch of the RSC’s thrown in. At times graphically explicit , it’s outrageous fun and I loved it.

And the three other characters not played by Ian and Helen? Well there’s Rufus , the court dog , a hand puppet we don’t get nearly enough  of , and the two young Princes fated to die in the Tower of London are played  by… well wooden spoons actually.

The whole show is a joy and it ends with a musical moral, and I paraphrase : “ if your reign should run its course, don’t fall off your effing horse”.

The play streams throughout the Fringe – its 5-star entertainment