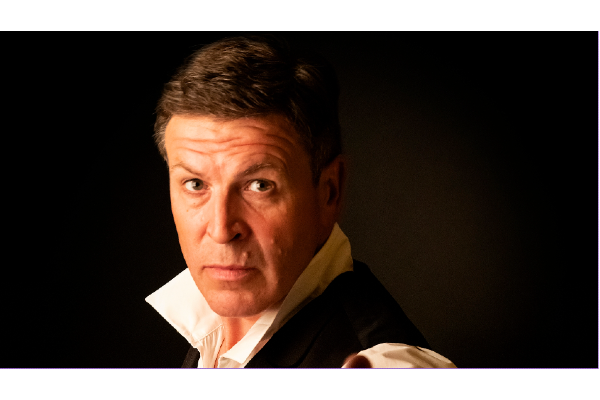 It’s a great thing that nowadays theatre  performers are largely immortalised on film or its YouTube equivalent. So it’s fascinating that Mark Stratford’s one-man show at Brighton  Fringe seeks to recreate the spellbinding magic of one of England’s greatest tragic actors – William Charles Macready.

In Drama King , the aptly named Stratford gives us an array of characters as well as the great man himself and rushes us through the 80 years of his life.

Born in 1873 Macready was destined to be a barrister when his fiery actor/manager father fell  into debt and prison, forcing the 16-year-old William to take charge of the rather poor acting  company of his father’ s theatre in Chester. Within two months he had shaken up the company and paid off  all the theatre’s  debts.

On his father’s release the young Macready made  his leading actor  debut as Romeo, heralding a new age  of realistic acting that we today would call “ method “ – portraying Romeo’s feelings and spirit as his own, not through the mechanically  rigid gestures that most leading actors of the time employed .

Mark Stratford’s great gift in this show, which he also wrote, is to equally inhabit the life and soul of Macready – a much larger than life actor who was inherently shy and socially awkward, and as much a tyrant to his fellow performers as his father had been. Drama King shows us the many ups and downs of Macready’s career  and it’s gripping to watch .

Like with all one-man shows I marvel at the sheer act of memory that Mark displays and he manages subtly to differentiate his own  narrative from that of his subject and many other characters of the time including Charles Dickens, who dedicated Nicholas Nickleby to Macready.

The skill of the performance is that Mark Stratford really brings Macready to life and it’s a fascinating life to follow.

You can catch Drama King again on 13 June| . Mark also has a one-man version of Jekyll and Hyde at the Fringe. It’s great too to welcome back the venue – the Rialto Theatre.

Complete with social distancing and other measures, it’s a joy it has survived to serve Brighton audiences.