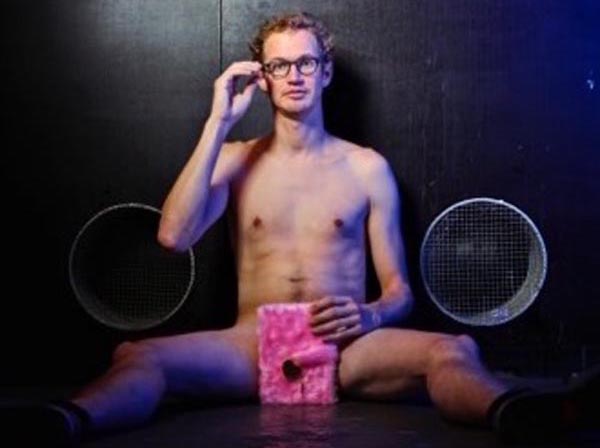 Sexy comedy (but at whose expense?).

Standing in nothing but tighty-whities and a leather harness, Dutch comedian Johan Goossens is a charismatic storyteller who knows how to beak the ice before sharing (over-sharing?) quirky, awkward and sometimes sticky anecdotes about his colourful sex life.

A school teacher by day, Goossens turns the performance into a learning opportunity, educating the heterosexual members of the audience on gay vocabulary like ‘top/bottom’ and gay routines like popping poppers and douching. He also had us raise our hands at certain questions, humorously noting that no one ever admits to being a bottom.

Strangely, for a show titled ‘Darkroom Diaries,’ there was very little time devoted to Goossens’ darkroom experiences. In fact, I can only recall one moment in the hour-long performance that directly addressed a darkroom; instead, Goossens discussed sex more generally. I wasn’t bothered by this, but such a misleading title could’ve left some audience members unsatisfied.

Although I enjoyed listening to Goossens (I could’ve listened to his dulcet tones all night long) I found some of his comedy problematic (if not reductive).

At one point he described vaginas as ‘disgusting’ and at another point he took a cheap shot at lesbians. As the show went on it became quite clear to me that his target audience was well-endowed, uninhibited gay men, and I wondered if the female members of the audience felt at all alienated.

As someone who presents himself as progressive, open-minded and sex-positive – and in a venue that endeavours to create a genuinely inclusive queer space in Brighton – I was surprised to hear Goossens drop the odd misogynist comment in a seemingly well-meaning piece about taking pride in your body and sexual (mis)adventures.