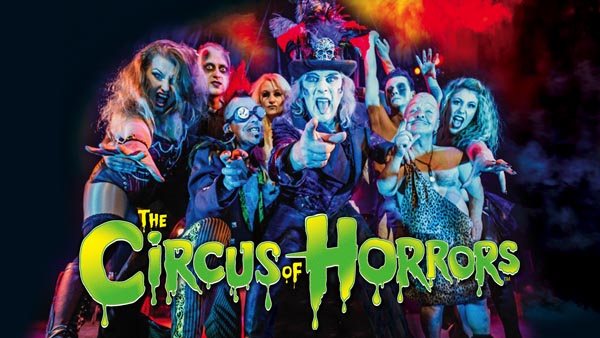 After taking to the road over 22 years ago and touring all over the world the phenomenon returns with its latest brand new show especially designed for Brighton Fringe Festival.

The spectacular features an amazing amalgamation of bizarre and fantastic circus acts act’s all woven into a sensational shock/horror story and the darkest of magic – taking the show to a whole new level, it’s driven by a mainly original soundscape and performed with a forked tongue firmly in each cheek, you’ll certainly Die Laughing.

Annually the Circus of Horrors plays over 100 UK theatres and this tour has expanded to take in festivals throughout the world including The Fuji Rock Festival in Japan (twice), the Wacken Festival in Germany plus shows in Chile, Uruguay, Holland, Belgium, Argentina, France, Italy, Ireland, Finland, Hong Kong and Moscow where it became the 1st UK Circus ever to perform in Russia. The show also played an astounding 10 nights at London’s O2.

This is not the first time that The Circus of Horrors has created history, as it became the only circus ever to reach the finals of Britain’s Got Talent and the first circus to perform in London’s West End for over 100 years.

The Circus Of Horrors’ appearances on various subsequent TV shows have turned what started as a cult show into a household name – taking the extreme to the mainstream.

Its’ TV credits now boast The X Factor, The Slammer, Daybreak, Fairground Attractions, Who Wants to be a Millionaire, Body Shockers, Fake Reaction, This Morning, Ant & Dec, The One Show and A Royal Command Performance.

The Circus of Horrors started it’s gruesome beginnings at the 1995 Glastonbury Festival and became an instant hit, touring all over the world from Chile to Chatham, Argentina to Aberdeen, Japan to Jersey including festival appearances with Alice Cooper, Ermine, Motley Cure, Oasis, Iron Maiden, The Manic St Preachers, Foo Fighters and many more.

What the media say:

♦ ‘The Circus of Horrors completely WOWED the audience’ The Daily Mail.

♦ ‘Bloody Good Fun – Barnum Would be proud’…..Time Out

♦ ‘Circus Without A Condom’….. The Telegraph

What the celebrities say:

You have to go and see this if. One day something will go wrong and you will be able to say I was there….. Graham Norton.

Offer not valid in conjunction with any other discount or against tickets already purchased.