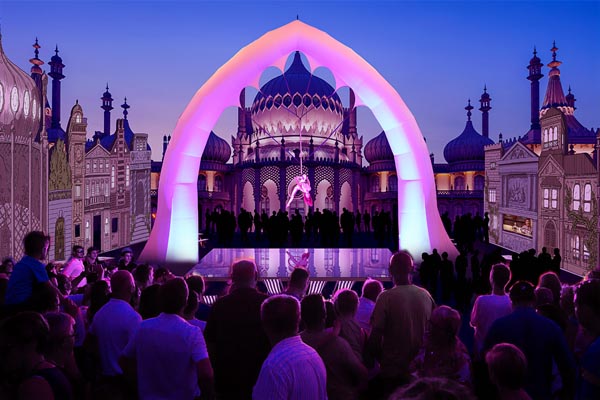 SHINY TOWN set to dazzle Brighton this May as Royal Pavilion Garden Transformed into Entertainment Mecca.

This spring, Brighton is set for a surprise as an entertainment paradise pops up in the leafy greenery of the Royal Pavilion Garden. Shiny Town is the newest addition to the cornucopia of entertainment destinations that are offered by Brighton Fringe throughout May but it is a little bit different from the others.

From May 25 to June 4, a town square will appear in the gardens in front of the Royal Pavilion. The square will house outdoor stages, an artificial lake and numerous food stalls and bars and the 19th century exotic Regency palace will form the stunning backdrop for a plethora of entertainment influenced by its own history and by the diversity of Brighton itself.

Shiny Town is a place like no other. On the surface, this sleepy pristine urban idyll is populated with people going about their business, eating at the varied food stalls, drinking in bars and milling about in the town square but scratch the surface and what lies beneath is something a little more mysterious and mischievous with an array of curious fun to be had.

During daylight hours there is family entertainment galore but when the sun sets on Shiny Town, the habitat takes on an altogether different persona, the vibe changes and that fun gets a little more edgy.

Amongst the packed programme of live entertainment comes the stunning Arco. Framed by the oriental decadence of the Royal Pavilion’s architectural design, stunning acrobatic performance are suspended high into the night-time sky for breathtaking aerial magic.

Also at night, performed on the artificial lake comes Trade Winds, a stunning reimagining of voyages, meetings and exchanges between different cultures across the sea. A nod to Brighton’s positioning as a place of immigration and cultural diversity, the mystical, Trade Winds is performed by the Brisbane based physical theatre group Polytoxic.

For a special one off event on the evening of the bank holiday Monday of May 29, Mother
India 21st Century Remix will take to the outdoor stage with an audio visual music masterpiece, marking the 70th anniversary of the partition of India and acting as an acknowledgement to the Royal Pavilion Brighton’s history as a hospital for Indian soldiers wounded in the battlefields of WW1.

Shiny Town plays host to playful and unique activities for young and old alike, including hula
hooping workshops and performances with Marawa’s Majorettes, a surreal and hilarious rock roadshow Bramble FM and Brighton based DJ, cabaret and performance artist Boogaloo Stu who shows Shiny Town visitors how to make their ideal partner in sock puppet form.

These are just some of the rich mix of offerings that Shiny Town will bring. With more acts to be announced Shiny Town is the place to see and be seen in Brighton this late May and June.

Mayor of Shiny Town – Tony Aherne, said: “Brighton has a proud tradition of building new towns shiny and bright with hope and optimism only for things to turn strange as night falls. We don’t expect Shiny Town to be any different!”

Chair of Shiny Town Entertainment Committee – Linda Catalano, added: “We are tremendously excited about Shiny Town springing up in the Royal Pavilion Garden in May. Brighton is a city of surprises. A place to expect the unexpected, where ingenuity and city life merge to produce a vibrant and exhilarating mix. Shiny Town takes that a few steps further and, mirroring both the unconventional creative nature of the city sitting alongside ordinary life and with more than a nod to the architecture and history of the Royal Pavilion itself, our programming takes Brighton itself as its inspiration. Like all shiny things, Shiny Town will provide a sharp reflection of its surroundings”