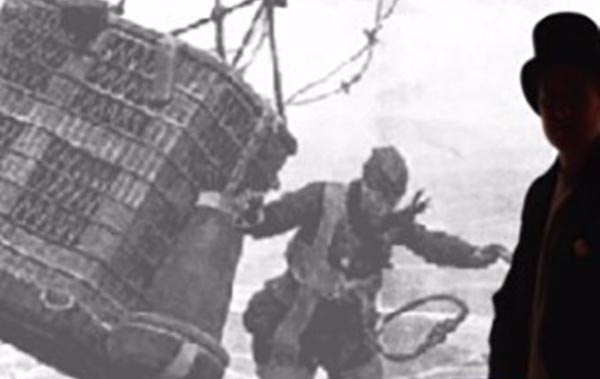 Thrust together by war and escapism, pulled apart by a century.

It’s 1916. An actor falls from the sky in Northern France. A hundred years on, can Sue and her son Jack, 20, escape political turmoil and an addiction to infinite warfare?

Four people thrust together by war, song, reality, and escapism, but pulled apart by a century.

The true story of Basil Hallam and Forces’ sweetheart, lesbian, Elsie Janis, recreating Gilbert the Filbert the Knut with the ‘k’.

Nominated for Best LGBTQ+ Show Brighton Fringe 2016 for Deep in The Heart of Me,

Now experiencing the party life in Brighton, ten years ago Harry Child was performing as a youngster in three successive West End shows. This piece marks his return to the stage in the company of his mum. The whole project gives her an excuse to keep tabs on him and get an insight into his world!

Harry plays Jack, the school drop‐out son of Alison’s character Sue, an academic, obsessed with digging out good stories from the archive. Jack is more interested in lying in bed, going online, and playing shooting games on his VR headset.

Alison says: “It’s a massive endorsement of our work to be selected for the third year running for special WINDOW showcasing at England’s biggest arts festival. We’re proud and optimistic that this show will excite our target audiences ‐ any grown‐up who lives under the same roof as their parents or adult offspring; anyone with an interest in First World War history or theatre history, anyone seeking to be entertained and challenged by an hour‐long, comedic reflection on contemporary life and its relationship to the past.”

Fall of Duty is suitable for ages 12+.