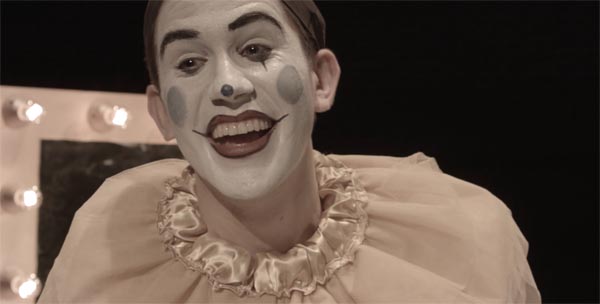 After two critically acclaimed, sell-out runs at the Cockpit in London, Richard Canal’s Cry, Blueberry comes to the Brighton Fringe.

POETIC, heartfelt and honest, Cry, Blueberry is a new magical-realist solo play praised with four stars at the Camden Fringe as one “to revere and respect” and “a strong and bold piece of theatre.”

Drawing from his own experiences – and touching upon themes including sex addiction, racial injustice, the accountability of bystanders, the profundity of clowning and the ethics of repentance and forgiveness – Canal’s intimate confessions wipe off the make-up to reveal the face of himself, his persona and the United States’ first decades into the 20th century.

★★★★ “A whole range of human emotion is expressed in a passionate performance (…) this is a brutally honest and sincere confession, and a profound and memorable performance”…. London Theatre

It is November 16, 1932. The Depression is at its greatest, and vaudeville – the roaring heartbeat of the ’20s – has ceased to beat.

Isaac Solomon Loew, a Jewish Mississippian, performs on Broadway as Blueberry, a happy-go-lucky Pierrot. Wrestling with the guilts of times bygone, he frequently flees from his pain not only into performance, but also into sex. His increasingly addictive escapes have finally lost him his wife, at the same times as he loses his employment. He enters his dressing-room for the last time; and as he pours his heart out to the audience, shedding his painted mask, he wrestles with his memories, mistakes and misdeeds – either to their conclusion, or his own.

Richard Canal is a London-based actor and playwright from Spain and the United States. He holds a BA in International Human Rights, and an MSc in Violence, Conflict and Development. Aside from Cry, Blueberry, he is currently collaborating on several other solo projects, including one about Salvador Dalí and the other about the Angolan rebel warlord Jonas Savimbi.

Cry, Blueberry is written and performed by Richard Canal and directed by George Goodell.