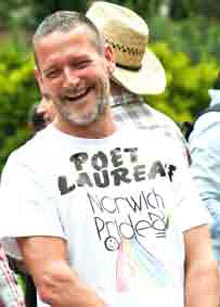 Controversial poet and artist Vince Laws will be performing at Incite, an evening of LGBT poetry and in-house jazz, at the Phoenix Artist Club, London on Wednesday, May 8 at 7pm.

Vince will be taking his This Pope Is Pants, Mental Helmet and Queen Never plaques along to this monthly event, which is hosted by Trudy Howson and features LGBT poets, performance artists and open-mic opportunities.

Vince’s living poem This Pope is Pants was banned from Brighton’s Jubilee Library in February during LGBT history month, prior to the Pope resigning.

A council spokesperson in February, said:

“Whilst we support artistic expression, we have to strike a balance between controversial work being exhibited in an exhibition in the foyer of a public library and not offending other library users or their religious beliefs. Where possible we accommodate artists and in this case the work was on show for the private view but our overall display policy is not to promote a particular religious view or cause library users offense.”

In April, two months later the city council agreed to let March For England fascists march on the seafront, bringing the city to a standstill and decimating business for seafront traders. This was despite a large and vocal opposition from local residents and anti fascist supporters to their presence in the city.