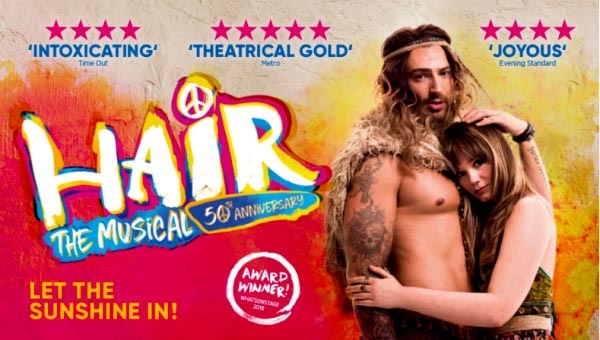 In a game attempt to add a pinch of relevance this production of Hair opens with a name check for Donald Trump before we’re quickly whisked back in time to the era of LBJ, Timothy Leary, acid, free-love and Vietnam. We then meet a tribe of hippy drop-outs in what amounts to a series of skits on the theme of sticking it to The Man. It’s pretty much devoid of plot and there’s little to be had in the way of actual fully formed characters. But taken as an anti-establishment revue it has a handful of great songs and some spirited performances.

In the first act we get to meet the tribe which includes Claude (Paul Wilkins) who rejects his Polish parents’ upbringing by adopting a Mancunian persona. Berger (Jake Quickenden) likes sex and smoking dope. In Colored Spade Hud (Marcus Collins) explains about the limited perceptions white America has of its black citizens. We also learn about chemical pollution (Air), the current president (LBJ), the way black women like white boys and how white women like black boys. There’s a baffling interlude where a middle-aged woman gives her opinions on men with long hair being like birds in nature before she reveals herself to be a man in drag. The thread running through this all of this is Claude getting drafted to fight in ‘Nam and having to decide whether to desert or join up.

About halfway through this first act Wilkins leads the cast in a superlative rendition of I Got Life. For those five minutes the show soars; it’s a truly joyous song and the electricity generated is almost palpable. It seemed like this was the show hitting its stride but, unfortunately, it didn’t manage to quite achieve that level again. There are still some wonderful songs to come and enlisting Shakespeare as a lyricist for What a Piece of Work is Man is a wise move. But then watch out, there’s Good Morning Starshine with its nonsense chorus of ‘Gliddly gloop gloopy/Nibby nobby nooby’.

Quickenden has a great voice and is certainly likeable. Apart from the scene where for five inexplicable minutes he goes a bit Jimmy Porter by raging against his smothering girlfriend who he accuses of being a terrible nag. Is this a critique of the sexism history tells us riddled the hippy movement? And when Berger sings about looking for a ‘sixteen-year-old virgin’ is this a critique too? I’d guess the answer to both questions is: no. But I suppose it would be unfair to criticise Hair for being a product of its time.

Collins is at least given more things to do. He has the most presence of anyone on stage and makes the most of playing a conservative parent and, at one point, even giving the Mae West treatment to a risqué joke. Alison Arnopp gives a wonderful comic turn as Jeanie, investing her character with a naivety which reminded me of Faye Dunaway as Bonnie Parker.

This is very good production which is expertly staged. I’m pretty sure the reason it’s not a complete success is down to either the source material or my unconscionable squareness which expects a musical to have both story and characters.