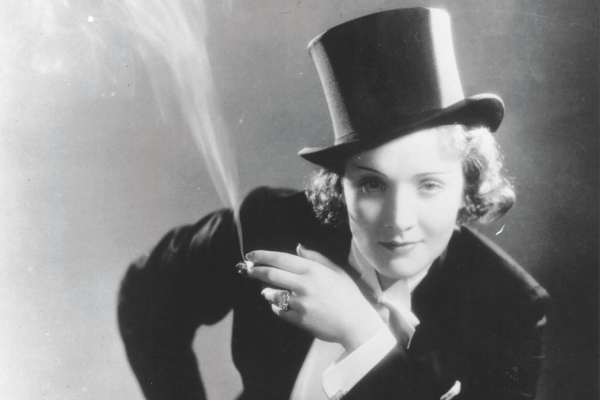 Marlene Dietrich was undoubtedly a superstar of Hollywood’s ‘Golden Era’ – but she was much more than that. By constantly reinventing herself, Dietrich stretched her career over 60 years, becoming a pioneering star of radio, a medal-winning war hero, a top-flight international cabaret artist, a recording star and an icon for generations of gay people.

Marlene started out as a chorus girl during the era of ‘divine decadence’ in 1920s Weimar Berlin. The freewheeling approach to sexuality during that period suited her very well – she embraced the sexual liberation enthusiastically and never abandoned it through her long life. Her many lovers included men and women, and she never apologised or tried to hide her preferences.

Famed as much for wearing men’s clothes as being a femme fatale, Dietrich’s cosmopolitan, sexually ambiguous and world-weary persona inspired many artists who followed. Madonna, Lady Gaga, Kylie Minogue and a thousand drag queens – they have all tried to channel Dietrich’s special allure.

But there’s nothing like the real thing and a new show about her life will take a look at her lesbian exploits, her film career and her later success as a concert artist. It will pay tribute to her amazing courage during World War Two.

Her anti-Nazi activism on the European battlefront brought her top medals from the USA and France.

Veteran gay activist Terry Sanderson, who will present the show, said: “Marlene has always had a big attraction for the gay community. The campness of her films, her devil-may-care attitude to convention (she was the first to popularise trouser-wearing for women; a novelty that almost got her arrested in post-war Paris), and her fabulous voice are just some of the reasons.”

During her early years in Weimar Berlin, Dietrich enjoyed the thriving gay scene of the time and was popular at the many drag balls and gay clubs that were popular before the Nazis came to power.

Terry Sanderson said: “Marlene Dietrich was a woman of enormous complexity, and this exploration of her life will show some aspects that are less well known, including her affairs with women, among whom were Edith Piaf and Colette. She is one of the few Hollywood icons who led something of an open gay life herself.”

The show included a full performance of Dietrich’s fabulous one-woman show, with which she toured the world – accompanied by Burt Bacharach and his orchestra – this is, indeed, an icon at the peak of her powers.