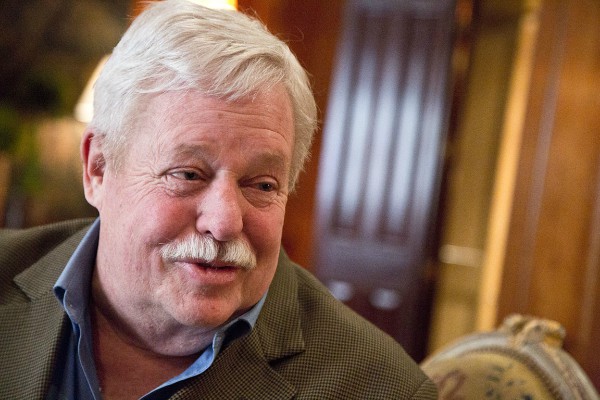 Armistead Maupin found fame in the 1970s as the author of Tales of the City. San Francisco, his adopted city, had become a gay mecca but it was something of a mystery: no one was really writing about it. Armistead was one of the first authors to bring LGBT+ characters into the literary mainstream.

The books are very much of their time but they’ve never gone out of fashion. New readers keep on discovering the bohemian world of Anna Madrigal, Michael Tolliver and Mary Ann Singleton. The characters are so vivid they may as well be real people.

We caught up with Armistead to discuss Tales of the City, San Francisco, his latest projects and much more. He’ll be appearing in London and Brighton in October.

Although Armistead is the Bard of San Francisco, he’s lived in London for several years. “My husband lived in London 25 years ago and loved it. I’ve visited many times – I have English relatives. We just wanted a new adventure and London is a great city, there’s no denying it. Sometimes if you ask a Londoner they will deny it.”

“We’ve done this before. We moved to Santa Fe about seven years ago for a new adventure. We didn’t last there for very long and moved back to San Francisco. And then we decided to take the leap – it keeps life interesting.”

Which character would you consider to be the key protagonist of Tales of the City? “If I had to name one it would be Anna Madrigal. The very process of writing it was about shifting my view from one character to the next, so each character gets their moment. It’s really up to the reader to decide.”

The bohemian world of The Castro had become notorious and you were one of the first to write about it. When you chose this as your subject, did you feel like you had a unique story to tell? “That’s exactly what I felt. It proved to be right – all these years later the story has survived. I knew that if I was bold enough to do it I could make it work. My own publishers at Harper Collins told me to tone down the gay stuff. I didn’t and I think it paid off. When you know you have a good story to tell, you tell it. That’s what every writer must do.”

The books are very funny. Did you always know Tales would be a comic story? “I knew it would be to a certain degree, but I didn’t see what was coming. I didn’t know that we would be in the middle of an epidemic and that I would have to write about that too; within the context of comedic work.”

“I recently went to see My Night With Reg, my first play since lockdown. It was fascinating to see the things we’ve forgotten about that time. What it felt like. The combination of humour and even lust, which did survive through AIDS although with serious modifications.”

Armistead met Rock Hudson in the early stages of his career. Did that encounter offer a glimpse of what the previous generations had lived through? “It was exactly that and I wanted Rock to find a way out. The night we met I said to him, ‘I want to write your biography. There’s no reason you can’t claim the dignity of your life.’ Even his partner said ‘Not until my mother dies!’ I thought if I was fucking Rock Hudson my mother would be the first to know. And I did fuck him, in fact, and I did tell my mother. So there you go.”

Was she impressed? “A little horrified but yes, she loved him. I did see us as being representative of two diametrically opposed versions of queer. I came out pretty early in my career. And there was someone who was locked in the closet and had been suffering for many years. Rock had a groove in his finger nail. It was a deformity he created by rubbing his forefinger against his thumb. To me that represented the torture he was feeling. He had a good time though. He was a happy gay man in some ways. He had the resources and he had the goods!”

What did you think of the new Netflix adaptation of Tales of the City? “We did things we didn’t get to do in the first series. We had an out the closet actor playing Michael, which had always been my dream.”

The original TV adaptation from the early 90s was not without incident. “PBS knew where we were going with it and they were terrified of the Christian right in America. There were bomb threats in Chattanooga the night it first aired. Tales of the City – that sweet little story. Bomb threats because there were two men kissing.”

“The dream I had that queer stories would become ordinary is coming true.” Armistead helped to make it happen. “I did, but thank you.”

Younger generations continue to discover Tales of the City – people who weren’t even born in the 70s. That must be very gratifying? “It’s the biggest thrill of my life. It tells me that I was first and foremost telling a good story. We can go back and read Dickens because he’s really writing about people, not the peculiarities of Victorian London.”

Does writing get easier with the passage of time? “No god dammit it doesn’t. I found that lockdown hasn’t been helpful for my writing. At the beginning of this experience I thought I’ll sit in my room and write. But my mind has always been stoked by things happening on the outside. By other people, parties, places I’ve been: writing grows out of that. It was true during Tales of the City. I’d go out to a club and some guy would pick me up because I was wearing penny loafers, so I could get a joke out of that.”

“I’ve been trying to write another novel called Mona of the Manor. It’s an interstitial novel that would fit into the Tales series as it currently exists, in the year 1993. It’s been tough, it’s been kicking my ass, I have to admit.”

Is the Old San Francisco still there? “I’m sure it’s still there but we were having a hard time finding it. That’s one of the reasons we left. It’s no longer a bohemian city. Whatever that means – I didn’t think of it at the time as bohemian. You hear the wrong stories in cafes now. You hear about work and work is boring to my mind. It’s very expensive, even more so than London. We have a much better living situation in Clapham than we did in the Castro, and Clapham isn’t cheap.”

“I’m so proud to be associated with that city and that time. I’m so glad I got to record all of that in my work. It will always be there for anyone who wants to know what it was like to live in San Francisco at the end of the twentieth century. So that’s a feather in my cap I’ll always show off.”

“I’m lucky because I’m very in love with somebody and I have been for 17 years. We share life together and we make life happen together. We always have the agreement that if one of us wants to do something, we would talk it through and do it. It’s very easy to move to another place if home is always with this one person.”

What do you think of Brighton audiences? “I had a great crowd at the Theatre Royal the last time I was in town. Brighton audiences are kind of rowdy in a nice way, don’t you find? Nothing perks me up like getting a laugh from a real audience, so I’m hoping to provide some.”

You can see Armistead Maupin live in October.