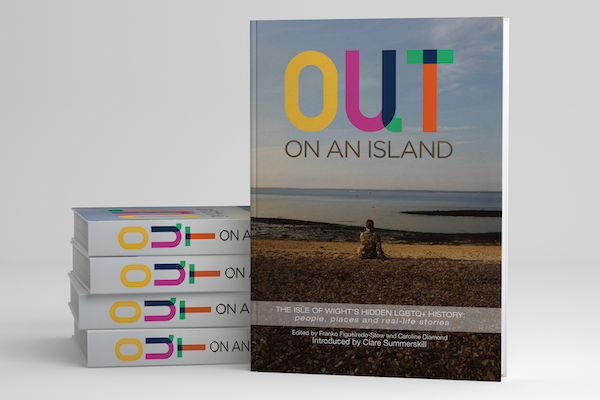 Since 2019, the Out On An Island project has been delving into the hidden history of the Isle of Wight’s LGBTQ+ community. Supported by StoneCrabs Theatre and funded by the National Lottery Heritage Fund, their team of dedicated volunteers has uncovered a rich history which has been largely erased or ignored. This research has culminated in the publication of a book, Out On An Island – The Isle of Wight’s Hidden LGBTQ+ History, due to be released on February 14.

Peter Tatchell, human rights activist, said: “Out On An Island is a brilliant oral history of LGBT+ communities and culture on the Isle of Wight: the persecutions, campaigns, defiance, solidarity and triumphs. Inspiring!”

The book features excerpts from 18 interviews with LGBTQ+ people, carried out over two years, who share honest, intimate accounts of what it’s like to be ‘out’ on the Isle of Wight, an isolated island with a long and abiding conservative history. Some settled there happily; others were born there but couldn’t wait to escape.

Caroline Diamond, Project Manager, said: “Russell T Davies chose the Isle of Wight as an old fashioned, isolated destination for his hit Channel 4 programme ‘It’s A Sin’, which looked at the impact of AIDS on the LGBTQ+ community in the late 1980s.

“This book features the Isle of Wight’s own HIV campaign with its Captain Condom mascot and the work of Karl Love, who was an NHS Sexual Health Worker at that time and is now an Isle of Wight Councillor.”

Essays, poems and images contributed by local people and volunteers build a picture of the social and political life of LGBTQ+ people on the island. This includes research into the treatment of the LGBTQ+ community in the local media, as well as the reactions to the launch of the first-ever Isle of Wight Pride in 2017. It is a candid, emotional record of human behaviour and the hurdles that can be faced in seeking to be your authentic self.

Out On An Island – The Isle of Wight’s Hidden LGBTQ+ History will be launched on February 19 at 3.30pm with a special event at Carisbrooke Castle Museum. From February 2022 to August 2022, the museum will also be hosting an exhibition of the project’s research and memorabilia, in concert with educational talks and visits with schools around the Isle of Wight. Pre-orders for the book are now available here.