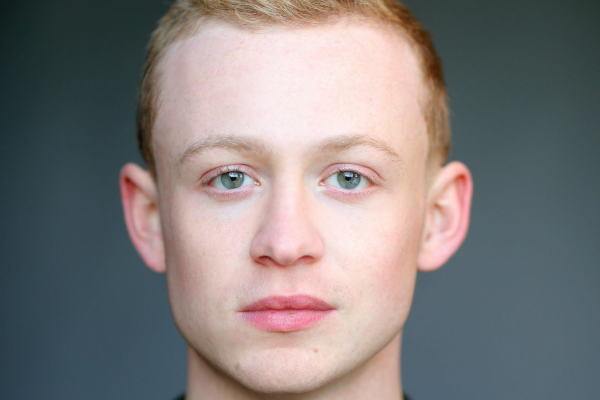 Scottish actor John Bell started big and just kept growing. Aged 8 he won a nationwide competition for a part in the hit TV Sci-fi series Doctor Who. “I had long blond ringlets and played a refugee who discovered who he really was”, he tells me. It wasn’t long before he had an agent, teamed up with casting agency The Hubbards and had embarked on a film career which later involved 2 of the Hobbit features. ‘ I was having a ball- it didn’t feel like work”.

Learning on the job, he balanced school with acting, and with tutors on film sets – including his mother who was a teacher. He finally left school at 14 and didn’t go down the route of drama school. I guess he’s most famous for his role in streaming series Outlander. ”It was just a regular audition: every Scottish actor wants to be in it”. For those who don’t know it, the long-running show is about time travel back to 18th century Scotland.

”I was a cheeky, funny, thin 16-year-old, so I fitted the role but I was surprised by the scale of its success: it’s very big in USA, Australia and New Zealand, all with people with Scottish ancestry”. Film was his life, but he admits he has wanted to do stage work for a while. As we spoke he was making his stage debut in the Queer solo show The Night Larry Kramer Kissed Me – see my review here.

”I was attracted because it’s an LGBTQ+play and director Steven Dexter was generous and sympathetic. It’s a different skill set from film acting. It’s a challenge, a little bit scary but not out of my reach. I saw a gala performance of it which had 8 actors, but then realised it’s a one-man show. I thought: in for a penny in for a pound”.

” I made that leap into the deep end. It’s been challenging and amazing. Now I’m in the run of it, I’m constantly thinking about it and playing with it. It was already inside me, I think”. John says as the run developed he looked for the little beat changes in the script. “The character’s emotions flip on a word- it’s like a rollercoaster. The audience need to feel comfortable but also uncomfortable – they are almost accused”.

To explain: the show follows the coming of age of a young would-be actor and his absorption into the Queer culture of New York at the advent of the AIDS era. The show relies heavily on lighting and sound and John agrees that has made him feel supported in his portrayal of a sometimes bitter, angry and sometimes joyful young Queer man trying to make sense of the mayhem and death around him.

He readily admits: “if it was a two-and-a-half hour play with just me on a bench, it would be difficult. But the music of the period played in the show is such a hook to let me feel it – it’s not a chronological piece; it’s many journeys back and forth”.

It’s a poetic, almost musical piece-the script has a rhyming pattern to it – and John says this is both a help and a challenge to the actor. “I’m trying to make it clear to the audience what the story’s about and what’s in the character’s head”. By utter coincidence John had seen Larry Kramer’s AIDS drama The Normal Heart at the National Theatre, and then soon after came the audition call out of the blue.

I was particularly interested in his approach to the end of his show, which sees him reel off name after name of lovers, friends, neighbours who have died of AIDS. “I had an image of individual people in my head: they became real to me and I could see them, but of course it’s just acing in the end”.

John would like to see the play have another life after its short run in Wimbledon- maybe back off-Broadway where it began. But for now his sights are firmly back on 10 months filming for the next season of Outlander. I asked if he had a coming-out story, and he said he had lots, but he told me about the Hobbit film after-party in Berlin, when he was 17 years old.

His parents were with him but he decided to head off with friends to check out Berlin’s Queer night-life. His parents followed him in a taxi and confronted him. “I said: I have to tell you something: I’m Gay. My mother said they knew and it was ok but it was too dangerous there for me, so come back home”.

I asked him to give advice to a younger John. He told me: “everything you’re panicking about: there’s no need to worry. Being Queer won’t affect your career; it’ll support your career. Being able to sit down and do an interview like this I really only could do in the last couple of years”.

On the vexed question of are Queer actors better at Queer parts, he says yes, but an actor should be able to inhabit anybody. “But there’s truth in a Gay actor playing a Gay character, and it’s also a question of representation. If I’d seen Gay actors playing Gay characters when I was younger I would’ve been more comfortable quicker – yeah”.

The Night Larry Kramer Kissed Me is at New Wimbledon Theatre until 26 February.  Outlander is available on various streaming platforms.