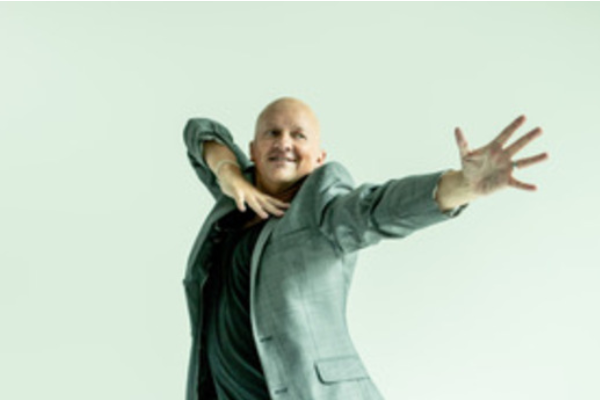 Brighton-based choreographer Mark Smith was 4 years old before he was diagnosed as deaf. He had not spoken to that point but was a quick learner thanks to speech therapy. Through very cumbersome hearing aids, he was able to hear a piano and also decided to take up dancing: “two new experiences for me”, he told me.

” It was a way to express myself”, he added.  After attending an all-deaf primary school he went to a regular comprehensive, where he joined 9 other pupils some of the time in a partially hearing unit, where sign language was banned.” It was to make us speak. I carried on with the dancing and was successful on getting into the Royal Ballet School as a Junior Associate. There were 100 kids and I was the only deaf boy”.

After school Mark saw an advert in Dancing Times for the London Studio Centre. “It was a London version of Fame, specialising in musical theatre and drama. I thought: that’s what I want to do. My deafness wasn’t a problem. My  mother always inspired me to believe there were no barriers. I was the only deaf student there, so I’ve always grown up in the deaf and hearing worlds”.

And Mark then told me his technique  for learning dance steps. “I stood in the middle and used my eyes, watching the teacher demonstrating and the people on either side of me. My focus was so strong and I used my eyes more. Hearing wasn’t always an issue- ballet language is in French anyway!”

Other techniques that have helped him are feeling the vibration of the music and counting. His first dance job was with Channel 4 on a programme about deaf performers, but Mark admits he always knew that he fundamentally wanted to be a choreographer. “I was always being asked as a dancer to invent dance steps. I loved making steps up – even as a child at home”.

Mark’s great influences were dance icons Gene Kelly, Fred Astaire  and Cyd Charisse and the visual comedy of Chaplin and Laurel and Hardy.

In 2010 he founded the Deaf Men Dancing company. “I was always being asked if I was the only deaf dancer. I knew there were others, but we didn’t talk about it. I thought: what happens if I put them all together? We workshopped for a week. It was a risk – we’d never worked in a deaf group before. I’m gad to say it worked. There was a feeling that we weren’t alone, that I wasn’t alone. We each had different styles- hip-hop, jazz, commercial- we learned each others’ styles, and I threw in sign language as part of the creative pot”.

The title for the group came from choreographer Stephen Mear – but more of him later.

It’s clear that all his career Mark has had to work harder than his hearing contemporaries. At technical rehearsals he now uses an interpreter. “I can lip-read but obviously there’s a problem when people turn their back on you. And I like as little background noise as possible in the rehearsal room”, which is something directors he works with have copied.

I couldn’t talk to Mark without talking about Strictly winner Rose Ayling-Ellis, who of course brought deaf dancing and deaf performers to national and international attention. “She’s a great dancer and she coped really well. She made us aware of the access side of being deaf. Lots of media asked me about it. I think she’s a fantastic role model for young deaf people who want to perform. She was clearly really focussed”.

As we spoke Mark had just choreographed non-binary RuPaul star Divina De Campo in the amazing Queer rock musical Hedwig And The Angry Inch at Leeds Playhouse. ( Scene review here ). “They were great to choreograph because they can dance”.

“ The only time I can hear without the aids is under water so I set the song The Origin of Love as if Hedwig was underwater. Mirroring the fluidity of sexuality in the lyrics. It’s been a joy to prove that I can do mainstream theatre”. And the show was a soar away success, with in my view the gender-fluid nature of the character coming out in both song and movement.

Now back to Olivier-award winning choreographer Stephen Mear, who is of course Mark’s husband. “ I taught him at London Studio and didn’t see him again for 12 years. We met again in Soho but I didn’t recognise him until I saw his hearing aids. Then I knew who he was”, said Stephen.  And they are now celebrating their 18th year together.

Asked if he had a coming-out story Mark said: I told my sister at the Ministry of Sound but she wasn’t surprised but was concerned because she thought I was more vulnerable because I was deaf. I told my mother one day in the kitchen and she was similarly protective”.

Asked to give advice to a young Mark, he said: “don’t worry too much abut what other people think. Believe in yourself. Young people now are more confident than I was.  I’ve had to work twice as hard to get anywhere and I’m grateful. Who would have believed I’d have my own company? Believe in yourself and just go for it”.